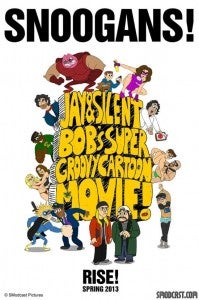 Comic Book Men’s Kevin Smith has announced that he will be touring the country along with Jason Mewes to promote his brand new cartoon movie Jay & Silent Bob’s Super Groovy Cartoon Movie.

Kevin Smith previously toured with his film Red State, and he plans to mirror that same format with his new movie. Kevin Smith and Jason Mewes will watch the movie with the audience, and then conduct a podcast Q&A after the movie.