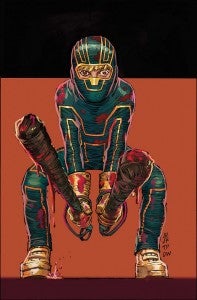 co-creator and writer Mark Millar is already at work on a script for a prospective third installment of the superhero action-comedy film franchise, based on the not-yet-completed Kick-Ass 3 comic book series by Millar and artist John Romita, Jr.

That's per an interview with Kick-Ass 2 director Jeff Wadlow, who has reportedly been workign closely with Millar on X-Force at 20th Century Fox.

"I've got nothing to do with the third one right now; Mark is writing it and honestly it depends on how well this movie does," Wadlow told IGN during a recent interview discussing the film's ending and post-credits sequence, which you can see below (spoilers on, obviously).

He could, hypothetically, be talking about the comic book series (which is already in progress), but our recent interview with Romita, Jr. suggested that he plans to be finished drawing the series in the next month or two, which makes the likelihood of Millar still working on the story seem fairly remote.

Kick-Ass 3 Movie Is Being Written Now