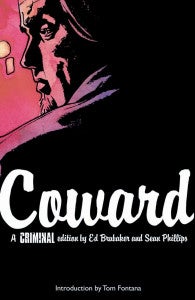 , the first installment of Ed Brubaker and Sean Phillips's Criminal series of comics, is coming to the big screen under the direction of Kim Jee-Woon, Variety reports.

The Korean director made his English-language debut last year with The Last Stand, Arnold Schwarzenegger's first movie back as a leading man after his time as the governor of California.

“Kim Jee-Woon is exactly the type of filmmaker with which we are looking to collaborate,” producer Jamie Patricof of Electric City Entertainment said. “His previous work consists of elevated genre films, set in interesting worlds, with three-dimensional characters, which makes him a very strong and exciting partner for Coward.”

The film has been in development since 2011. According to Variety, "Brubaker adapted the screenplay, which takes place in a universe of hustlers, crooked cops, pickpockets and other lowlifes. The story centers on a second-generation heist planner who can be relied on to have a bulletproof exit plan."

Brubaker won't be at New York Comic Con this weekend, according to his Twitter account because he has two movie rewrites to do, so it's not unlikely that one of those is Coward.