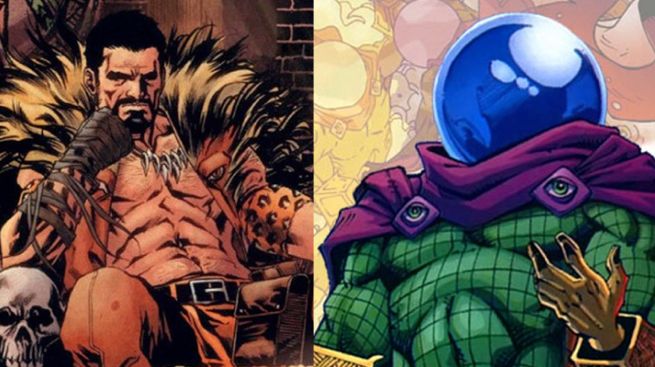 Even though Amazing Spider-Man 2 opted to go with an X-Men: Days of Future Past after-the-credits scene rather that a future Spider-Man movie teaser, director Marc Webb did include some Easter egg images in the credits. The images appeared to tease various possible members of the Sinister Six.

In the Amazing Spider-Man 2 bonus disc “Something Sinister This Way Comes” that is a Target retailer exclusive, Webb puts an end to the debate and reveals who he was teasing.

“It’s tricky, because we’re not exactly sure if all those people are going to be in the Sinister Six or even in the next movie. Like the Mysterio mask, I just think looks really cool. And I love Mysterio, but we haven’t all agreed on it, so but I just forced it in because I thought it looked cool,” added Webb.

While Webb doesn’t specifically name Kraven the Hunter, he does indicate that the cat-like symbol in the credits was actually a spear, which pretty much confirms it was Kraven the Hunter. In an exclusive interview with Comicbook.com earlier this year, Webb also revealed that Kraven was the villain he was most interested in that hasn’t already appeared in a Spider-Man movie.

It's important to note that while Webb is confirming Mysterio and Kraven the Hunter as being teased in the Amazing Spider-Man 2 credits, he makes a point that this is no guarantee they will actually be utilized in future Spider-Man movies or spinoffs. Here is some video of Webb's comments, uploaded to YouTube by a user with the handle Amazing Spider Man.

Sinister Six is scheduled to be released in movie theaters on November 11, 2016.