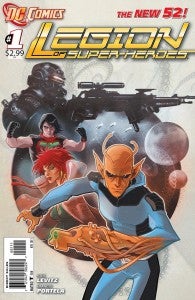 In an upcoming interview (it's unclear for whom, but Bleeding Cool, where the news is breaking wide, suggests The Outhouse) coming out of the Phoenix Comic-Con, a forum member on the Legion Abstract says that onetime Legion of Super-Heroes artist Scott Kolins will return to the comic for a three-issue run that, according to Kolins, will begin with the series' "zero issue." His last regular work on the team was in 1999, according to Comic Book Database.

While nobody at DC has officially confirmed anything yet, Bleeding Cool reported some time ago that all of DC's ongoing titles would get a #0 in September, and then return to their regular numbering--probably with some creative changes--the next month. A group of loose-lipped creators at Boston Comic-Con confirmed it, but even after their panel DC has refused to address the issue and reports are that creators have been instructed not to talk about it. Kolins, according to the report at Legion Abstract, was embarrassed to have inadvertently slipped and confirmed the move.

There has been some speculation that the "zero issues" would be a perfect place to launch some new titles, although DC has said in the past that they want to remain at 52 issues and only Justice League International by Dan Jurgens and Aaron Lopresti has so far been confirmed as ending with August's #12. Any other cancellations or replacements would likely be a shot of cold water in the face of fans and retailers, since they wouldn't have appeared in the solicitation text and so orders and pull lists won't have been adjusted to accommodate.

If persistent rumor are true, Kolins (who has written more and more of the books he's drawn lately) will reteam with his Magog collaborator Keith Giffen, who will be writing the series. No word on who might follow him on the book after the initial three issues, although rumors of Giffen as writer has had some fans clamoring for him to return as the artist of the book. Giffen has done breakdowns for a number of high-profile projects of late, including 52 and Justice League: Generation Lost, but his most recent full-pencils gigs were the Ambush Bug: Year None miniseries and a couple of spot issues on Booster Gold.