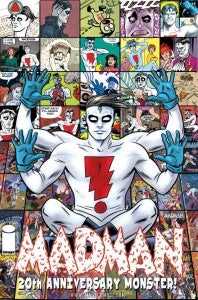 Here is another one to add to the list of holiday gift ideas for comics fans. Image Comics has announced the Madman 20th Anniversary Monster Hardcover will be arriving in comic book stores this December.

The Madman 20th Anniversary Hardcover will offer new Madman material from well known contributors. Mike Allred introduced Madman to the independent comics world twenty years ago, and the hardcover will feature an all-new Madman story from Allred. The hardcover will collect almost every Madman illustration from the past 20 years, which will include art by Frank Frazetta, Jack Kirby, Alex Toth, Moebius, Frank Miller, and Dave Stevens.

"In my new story I was inspired to take Frank "Madman" Einstein on an adventure that took him on retrospective time trip, an inter-dimentional detour, a jungle excursion, and a kind of faux-family therapy exchange. I pulled out all stops," said Mike Allred. "We're making sure that everyone will be getting some serious bang for their buck!"

The Madman 20th Anniversary Hardcover will be 264 pages in length with a suggested retail of a hundred bucks. The hardcover will go on sale in stores on December 21, 2011.