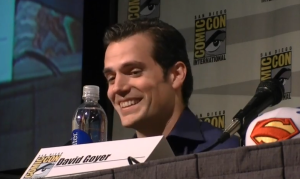 Speaking with BBC presenter Kevin Pamplin at the Jersey Rugby Club in the U.K., Man of Steel star Henry Cavill reportedly said that he is "more than excited" to work with Ben Affleck, who was announced earlier this week as the new Batman.

The actor, who hails from the U.K. originally, is back home before launching into Man From U.N.C.L.E. and Batman vs. Superman.

"He is such a great actor Im so very excited about working with him," Cavill added. "He is going to have such a presence. I can't wait."

Batman vs. Superman, set to star Cavill, Amy Adams, Laurence Fishburne, Diane Lane and Ben Affleck, is due in theaters on July 17, 2015.