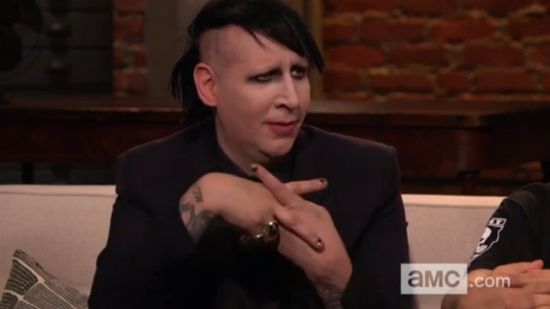 In a Talking Dead episode that will live in infamy, Marilyn Manson shared many bizarre, rambling theories on The Walking Dead. Of course, sometimes words alone were not enough, and at one point, Manson used his hands to help the viewing audience visualize what he thought was going to happen between Michonne & Daryl Dixon.

After executive producer Gale Anne Hurd shared her insight on Tyreese and Carol for this season, Manson blurted out, “Can I make a strong prediction? That Michonne and Daryl [visually showing two scissors coming together with his hands].”

Fortunately, AMC has released a clip online of Manson’s Daryl and Michonne prediction, so you can view the scissoring demonstration for yourself.