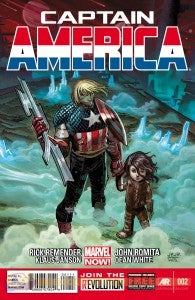 It's hard not to notice that Captain America looks a bit more like Thor, with flowing blonde locks on the cover of the forthcoming Captain America #2 from Marvel NOW!, currently viewable over at Comic Book Resources.

With art by John Romita, Jr., the series will be written by Rick Remender and it remains to be seen whether there's a reason for this apparent hairstyle change or if it's just an artistic choice by Romita to give the typically buttoned-down Steve Rogers a bit more of a shaggy look.

The story, which takes place in "Dimension Z," sees Captain America holding onto a high-tech piece of weaponry while holding the hand of a small child in the midst of a story that sees the star-spangled Avenger take on Arnim Zola.

"He's taking down super villains and saving the world and in the midst of all of this, Steve Rogers the person gets lost in the shuffle," Remender told CBR last month. "He is so exhausted but driven by this sense of duty that when this situation arises and things move forward, he's going to have a very big reaction. I'll deal with the fallout from things like Avengers Vs. X-Men and how it affects Cap in Uncanny Avengers where you're also getting the return of the Red Skull. This is going to be a very different thing and won't really deal with those ramifications so much. He's got his mind on other stuff in this adventure."

The issue will be the second part of a ten-issue arc dealing with Cap's trip to Dimension Z, and will hit the stands in December.