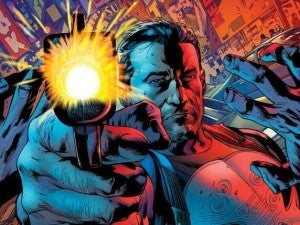 Marvel's chief vigilante is cheating death and getting a new lease on life yet again. After most recently surviving his time as "FrankenCastle" and being transformed back into a human, Frank Castle will have another, more modern ongoing series this August. Marvel has announced that superstar writer Greg Rucka and artist Marco Checchetto will helm the new Punisher title, and Rucka has already promised some new direction and circumstances for a solo operative who's been around for over 35 years now. "We have two established groups — one is called The Exchange, the other is sort of unnamed and is apparently headed by the Owl," Rucka said. "The deal with The Exchange is interesting — they are a 2011 crime organization" that is "Wi-Fi enabled and have access to the cloud."

The new series sees The Punisher dealing with a reorganized group of criminals, who have restructured themselves after being hunted down by Castle for years. After dealing with so much over the past couple of years, Rucka has described the character as being in a place few may have seen him, "Frank is incredibly damaged. He's a broken, broken human being. A price has been extracted from him unwillingly to be what he is," said Rucka. The Punisher will also have access to what has been referred to as a "tool box" of weapons, including one "upper echelon" tool that Rucka does not want to reveal at this time.

The first two issues of The Punisher will both be released in August of 2011, but will still bear the parental advisory label so accustomed to readers of many of Frank Castle's stories. For those not knowledgable of the character, this would be a perfect opportunity to jump onboard!