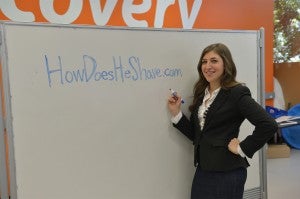 For The Big Bang Theory's Mayim Bialik, art imitates life much more directly than any of the show's other performers; a real-life PhD in neuroscience and a lifetime of reading comic books called her to the attention of the folks at Gillette, who were putting together a campaign centered around how Superman would shave his invulnerable hair. Her Enzymatic Follicle Denaturation Theory raised some eyebrows around here, and we figured it was a good opportunity to try and track her down and ask her about Superman, The Big Bang Theory and being a geek girl in today's charged culture. ComicBook.com: So for your theory on how the Man of Steel shaves, here's my big question: With the rest of the people on the panel for the Gillette question, they kind of tried to make Superman work in the context of known science. You seem to assume that Kryptonian technology would change science as we know it, and basically say that we have to approach Superman on his own terms to come up with an answer, is that about right? 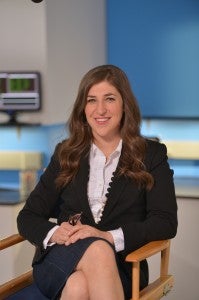 Mayim Bialik: I don't know. Obviously there are many established theories for decades as to how Superman shaves. I think to me I approached it assuming enough similarities between Kryptonian genetics and human genetics to be able to make a hypothesis about the actual structure of the hair follicle. I don't know if I thought about whether I brought myself to Superman or Superman to me. ComicBook.com: How did you get drafted into this campaign? You seemed kind of like the odd person out, a bit. Bialik: Actually I grew up in a very strong comic book culture and comic book home and so besides being a scientist I'm also sort of a bona fide geek, I promise. I think the fact that I'm on The Big Bang Theory which is a show that is beloved by people who often also love comic books and is about characters who love comic books, I think it's kind of a slam dunk. Obviously I think my theory is the best because I'm a neuroscientist and I think my theory's awesome but I think I'm actually a very logical choice. I think ti's also very cool to have a female who is comic-savvy to be one of the people giving a theory so I'm very proud to be the only female. ComicBook.com: See, when you say, "No, I'm a geek, really!", I thought that it was one of these strange things that happen where people in geek culture are expected to justify themselves all the time. Bialik: Honestly I think of it more from the female angle because there's been a lot of interesting attention about female geekdom and I get asked a lot about it because of The Big Bang Theory. It's like when we went to Comic-Con for the first time, everybody on the Big Bang cast was warning me, "It's intense--the people are really interesting but it may be kind of weird," and I got to Comic-Con and my feeling was, "Oh, these are people like me. This is the most normal thing ever." So I feel very at home in that culture that I was raised in. When I hear other actors on our show asked, "Are you a geek?" and it's like, "Well, I'm a theater geek," well that's very different from crying when you see the Man of Steel trailer--which is something that happened to me. True story. ComicBook.com: If it makes you feel better, almost everyone in my Twitter feed said the same thing. I think "something in my eye" would have been trending among my friends after the "You are my son" spot they ran. 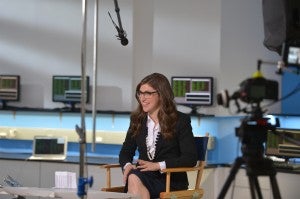 Bialik: Absolutely. No, it was intense. I think honestly, not to be all weird and elitist about it, there's two kinds of people: There's people who see that trailer and cry and there's everyone else [laughs]. ComicBook.com: Is the Superman thing something that you've ever actually given any thought to? It honestly never occurred to me, i don't think. Bialik: No, i didn't think about it. Obviously I e-mailed Bill Prady when I was formulating my theory and so he and I talked about it a little bit. He knew the exact references, down to the edition, that it was referenced in, the various explanations. So I don't think it was something I'd specifically thought about. Honestly as a kid I had lots of other things to wonder about about Superman--could I ever marry him?  That was something I thought about when I was a child. But no, the shaving had not occurred to me! ComicBook.com: Geek culture is so full of stuff like that but it's funny because there's the two arguments: VERY PASSIONATE or they don't care at all. Bialik: Totally. I've seen that on my Facebook page, too. When I first posted and tweeted about it that I was doing this campaign, a lot of people were posting that there's no need for them to go to howdoesheshave.com; they know exactly how Superman shaves. But I was saying that part of the fun of Man of Steel and this sort of notion of theorizing is all part of the new aspect of Superman that we get to see everytime we get a new incarnation or a new movie. I think there's still room for a lot of creativity in comics and comics culture, and I think that's really what this is about. ComicBook.com: Since you brought up the discussion around geek girls, were you aware of the mini-controversy that came up around the "Where no woman has gone before--the comic book store!" TV spot for The Big Bang Theory? Bialik: Oh, I didn't! I didn't see that spot--and I actually had a lot of feelings about that episode anyway because I grew up in comic book stores. I grew up sitting on the floor of many a comic book and record store throughout my childhood and into my teens and even into college. I actually would have loved if Amy or Bernadette had been into comic books so it wasn't so kind of polarized. Later in that episode when the girls kind of get into this debate, those are real debates I've had in real life. The Thor's hammer one I've had with Bill Prady. ComicBook.com: It's always interesting because The Big Bang Theory is such a massive hit that there is inevitable backlash. Bialik: Sure. ComicBook.com: I think there's a segment of the audience that's like, "No, screw those guys! They're Hollywood geeks!" Bialik: I'm a real, genuine nerd, I promise you. ComicBook.com: What was it like to join such a close-knit cast in midstream? Bialik: There's a lot of aspects to joining something that's already successful. The first is that it's sort of off you to make it successful, which is nice. You get to just go in and do your thing. But I do liken entering at the end of the third season to starting high school two weeks after the semester's first started and everyone has their lockers and everyone knows who they want to sit with. It's kind of like that. You definitely have to kind of make your space there but I'm very close with Jim Parsons and so that was a really, really kind of easy friendship and working relationship and that really helped make me feel comfortable. And I'm close with Melissa Rauch who plays Bernadette, so that especially helped make me feel more at home. And the fact that Melissa and I were brought in at the same time also kind of helped because we were sort of in the same boat as we adjusted. ComicBook.com: And it means that they're changing the whole storyline and the dynamic, rather than a single new element that people can single out if they're not happy. Bialik: I mean, I think so. I think there were a lot of people who were very concerned about having a "female Sheldon," and that a lot of people were upset that he was no longer asexual. There were a lot of people who were annoyed with me at first, who were very resistant to changing the dynamic of Sheldon. So we've tried to be really delicate about that and I think our writers have done a great job of not making me a female version of him--and also not making every episode about our relationship because I think that would get boring for everyone. ComicBook.com: Who would be the biggest actual geek in terms of somebody who's similar to their character on the series? Bialik: Uhh, you're talking to her! Yeah, it would definitely be me! Besides myself...that's hard. everybody's smart but Jim is exceptionally intelligent so I guess intelligence-wise I would say he's kind of similar-ish but there's so much about him that's behaviorally different, I just don't know. Kaley Cuoco's character is the only one who's not a broad, kind of crazy character.