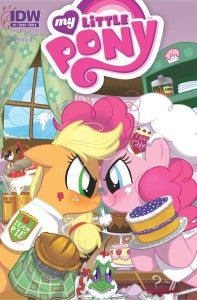 Alex de Campi and Carla Speed McNeil are among the creators in line to participate in My Little Pony: Friends Forever, a new, ongoing series from IDW Publishing that will allow the writers and artists the opportunity to tell one-shot stories that focus on different pairs of ponies getting into various hijinx and will feature a mix of new creators as well as old favorites. The series launches in January 2014 and is set in the world of My Little Pony: Friendship is Magic, airing on The Hub and currently one of IDW's consistently top-selling titles. "Every My Little Pony fan has a personal favorite character," said editor Bobby Curnow, "This series will allow a closer look at those adored ponies (and creatures) while maintaining the fun, adventure and humor of our other My Little Pony comic books. If you like buddy comedies, this is the comic for you!" "My hypothesis is that everyone has two Ponies: one that reflects their actual personality, and one that they aspire to be," said Michael Kelly, Hasbro's Director of Global Publishing. "I'm pretty sure this new series is all the proof I need. The only question is, will your two Ponies be featured?" The first pony pairing will feature Applejack and Pinkie Pie in "The Pie's The Limit" by two noted authors, Alex de Campi and Carla Speed McNeil. "My daughter (3 years old) and I are both huge fans of the My Little Pony: Friendship is Magic animated series," said writer Alex de Campi, "It's a delight and an honour to be briefly allowed to be custodians of these wonderful characters -- especially my daughter's favourite pony, Pinkie Pie." "Working with the My Little Pony brand is very satisfying," said Carla Speed McNeil, "The characters are so well conceived that a writer can deal any set of 'cards' and make a great story, and so well designed that they're endlessly versatile while remaining loads of fun to draw. It's definitely the show I wish I'd had when I was a kid!"