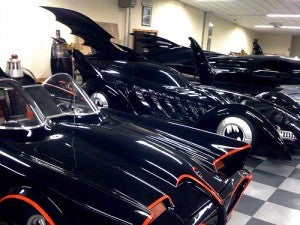 "When you hire a new artist at DC, to work on Batman, one of the first things they want to do is invent a Batmobile." -- Dan DiDio

Roko Belic's "The Batmobile," screened on Friday afternoon at the IGN Theater, is a delightful exploration of one of the most famous cars in pop culture. Car junkies and Bat-fans alike will enjoy this 58-minute peek at the creation and evolution of Batman's ride. The documentary dives into the design and construction of various Batmobiles, and features anecdotes from directors, production designers, and actors, but keeps things light and engaging with commentary from cosplaying fans who love all things Bat.

The documentary itself is visually stunning, featuring initial sketches, blueprints, finished models, and - of course -  plenty of film footage. The Batmobiles themselves are even more stunning.

We're treated to an assortment of fun facts about Batmobiles from every era, among them:

- The Batmobile from the 1960s TV show was based on a concept car, and designed by a professional vehicle modder. The neon red was added after screen tests, to provide more contrast against the Batcave and other environments. - The first pass at the Batmobile designs for the Burton films didn't have a door. Oops! - Kim Basinger took her shoes off every time she exited the car, because the paint was so sensitive. - The Schumacher films feature a vehicle that combines H.R. Giger designs with inspiration from bat anatomy. - The engineering team built go karts to test drive around the shop. - The Tumbler from the Nolan films was modeled before it was sketched -- parts from toy Lamborghinis, Humvees, and military vehicles (including airplanes) were glued together for the concept.

Film and television aren't the only media examined - comic art is featured as well (including a panel from Batman: Hush that includes depictions of several past Batmobiles). Batman has needed a vehicle since the very beginning, and it's fascinating to see how different the current version is from his first ride. We learn that the original Batmobile was just Bruce Wayne's car (so much for secret identities!), but that it evolved into a darker, more imposing vehicle, and eventually took on different personalities in each era of the book.

The Batmobile is a symbol of power, but it's also a symbol of hope -- in a touching moment near the end of the documentary, the crew brought the Batmobile to a children's cancer ward. Many Bat-fans can recall childhood awe at the coolest vehicle on television (or in comics, or in films), and the makers of the documentary wanted to bring that experience to life for a special set of youngsters.

"The Batmobile" isn't just for New York Comic Con attendees -- it will be bundled in with the home release of "The Dark Knight Rises." Consider this a special feature that shouldn't be missed.