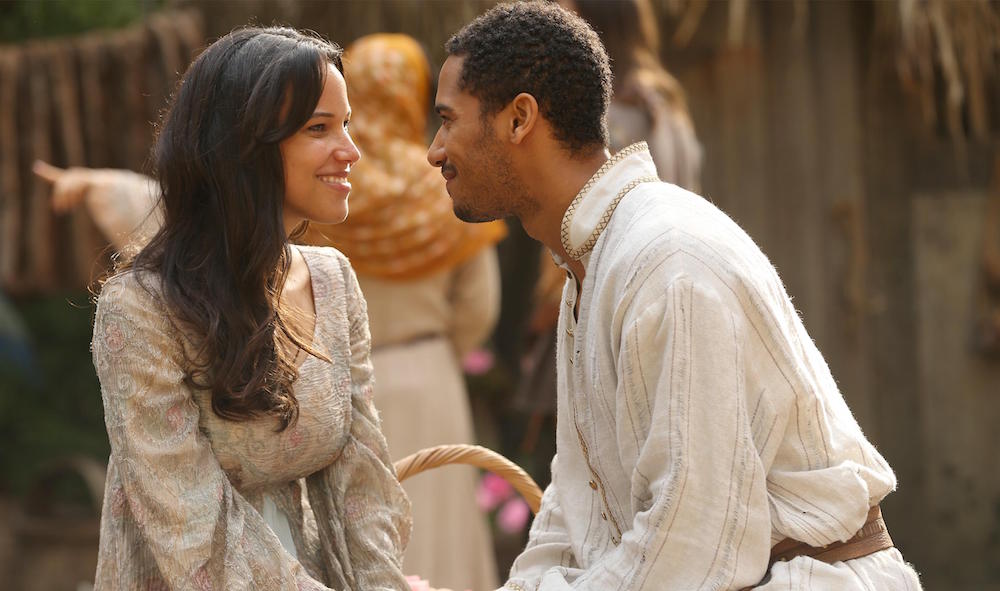 “Nimue” begins with another flashback, “1000 years before the age of Arthur,” where we see Merlin (Elliot Knight) and another man stranded in the desert, where they find the Holy Grail. The man tries to pick it up and explodes into dust, but when Merlin lifts it, he is able to drink from it and is given his magic and immortality.

In flashback-time Camelot, Merlin asks Regina (Lana Parrilla) and the others recover the hilt-half of Excalibur from Arthur, while he and Emma (Jennifer Morrison) go after an ember of the fire of Prometheus – as a spark from it is needed to re-forge Excalibur. Then in a memory, we are introduced to Nimue (Caroline Ford), who first met Merlin after the evil, masked Vortigan destroyed her village. Merlin and Nimue fall in love, but he is hesitant to propose to her because of his immortality. He reveals the truth to her about the Holy Grail and conceives the idea of melting it into a sword powerful enough to make him mortal again – Excalibur.

Merlin and Emma leave, and Zelena (Rebecca Mader) admits that she knows how to sneak into Arthur’s castle and will share the information, if they give her magic back. They follow her advice – agreeing to take off her magic-preventative cuff – if her plan works out. Snow stays behind to guard Zelena, while Regina, Hook (Colin O'Donoghue), Charming (Josh Dallas), and Robin (Sean Maguire) go inside. Before long, Zelena tricks Snow (Ginnifer Goodwin) and successfully knocks her out and ties her up.

In another memory, we see Merlin and Nimue surveying the ruins of her village. She realizes that she wants Merlin’s magic so that she can protect people and prevent other similar incidents. Merlin refuses to grant her permission to drink from the Grail, but unbeknownst to him, she already has it and takes a sip. They leave the ruins, and Merlin uses the fire of Prometheus to melt the Holy Grail into Excalibur. Shortly after, Vortigan sneaks up on them and stabs Nimue, presumably killing her. Merlin is about to fight him, when Nimue suddenly stands and rips out his heart – admitting that she drank from the Holy Grail. Merlin explains that if she kills Vortigan, she will become dark. 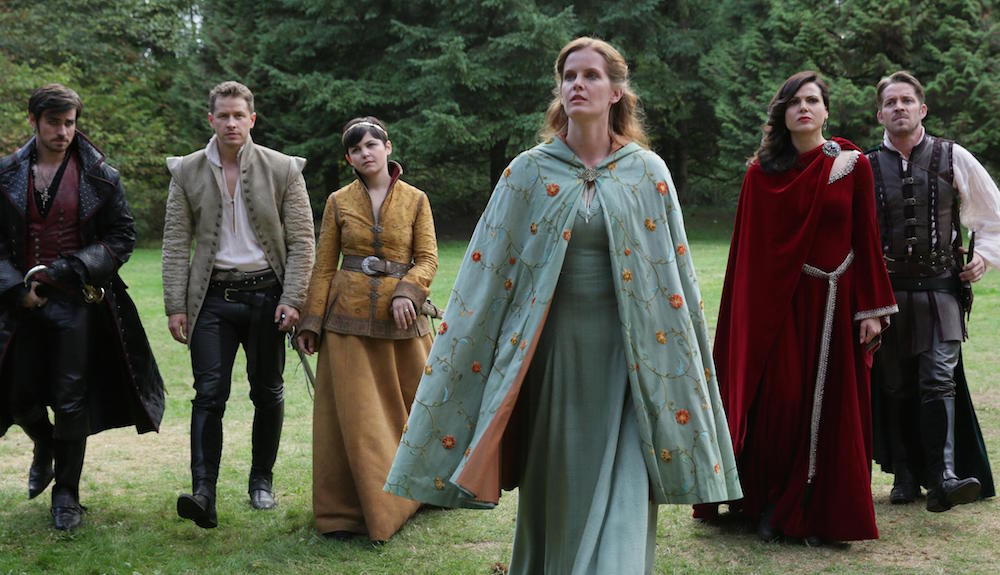 Then, in Camelot again, Merlin and Emma are headed to the spot where he once forged Excalibur so long ago. She will need to summon Vortigan in her subconscious – in the same way that Rumple has been in her subconscious, as a previous Dark One – because Vortigan has the only remaining ember of the fire of Prometheus. She is able to conjure who she believes to be Vortigan, but when “he” pulls up his mask, it is revealed that the first Dark One is Nimue.

Merlin’s memory continues, and we see Nimue crush Vortigan’s heart. Her skin becomes scaly, and in that moment, she becomes the first ever Dark One. She takes Excalibur and smashes it into two pieces. In the following days, Merlin put half of the sword “in the stone” to protect it, while transforming the other half into the Dark One’s dagger to control Nimue.

Again in Camelot, the subconscious form of Nimue begins to control Emma, forcing her to strangle Merlin, until Emma finally overcomes her. She takes the ember from Nimue, and then Nimue leaves – reminding Emma that she always be in the back of her brain, ready to be summoned for dark magic.

Back at the castle, Regina and the others finally make it to Arthur (Liam Garrigan), when Zelena appears with Snow, still bound. Arthur removed her cuff, and in return, Zelena uses a spell to turn the hilt-half of Excalibur into another summoning object so that Arthur can control Merlin. Arthur calls Merlin to them, and the sword works perfectly. Merlin begs Arthur to reconsider, saying that can fix everything and snuff out the darkness, now that they have both parts of the sword.

In present day Storybrooke, Emma stands over the two pieces of the sword, contemplating. The figure of Rumple (Robert Carlyle) appears, as does Nimue, followed by a legion of previous Dark Ones. Inspired, she uses a spark from the ember of Prometheus to fuse Excalibur back together, grasping it for her own.

Once Upon A Time Season Season 5 Episode 7 Recap With Spoilers: Nimue