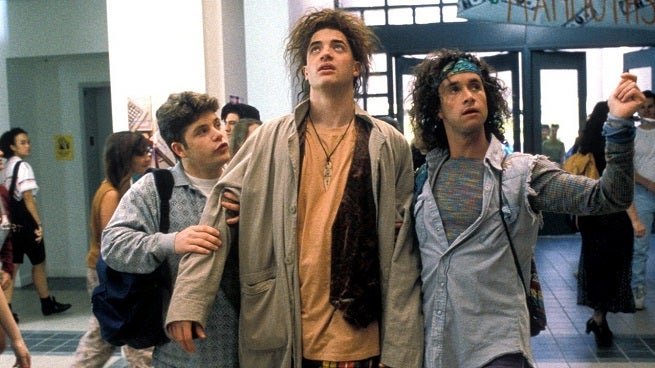 “Encino Man 2—let’s do it,” Shore told Variety while walking the red carpet for Chris Rock's Top Five this week. “My agent and I are talking about it.” He added that fans interested in actually seeing it come to fruition should tweet at his co-stars -- Sean Astin and Brendan Fraser -- as well as Disney.

Asked why, he didn't have any big ideas or philosophical reasons. "I think it would be fun," he said. "It was a cute movie."

The first film, which Gene Siskel said "badly mixes the juvenile humor of Bill and Ted's Excellent Adventure with the story of E.T.," centered on a pair of slacker teens played by Shore and The Lord of the Rings's Astin who find a caveman (Fraser) frozen in a block of ice. They thaw him out, he comes back to life like a Cro-Magnon Captain America, and the rest of the film became a fish-out-of-water comedy as they struggled to help him adjust to the modern world.

In spite of earning a dismal Rotten Tomatoes score and netting Pauly Shore a Razzie Award for Worst New Star, Encino Man made more than $40 million on a budget of about $7 million, making it a big enough commercial success to earn a feature-length, made-for-TV spinoff Encino Woman.

...Yeah, we didn't know that existed, either.