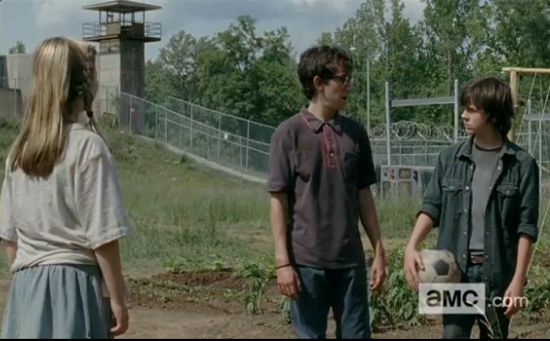 Earlier this week, Comicbook.com reported that Carl Grimes had made some new friends for The Walking Dead Season 4. Now, one of Carl's new friends has been identified as Vincent Martella, who is the voice of Phineas Flynn on the animated series Phineas and Ferb

Martella is the guy standing next to Carl in the photo above. Martella is playing a character named Patrick, who is a survivor helping to build the prison community. In an interview with Entertainment Weekly, Martella said, "He’s right around Carl’s age. He’s a little bit older. He’s one of the new people who Carl gets a little closer with. Carl hasn’t really had anybody his age, so now you kind of get to see Carl’s relationship with people his own age and that’s one of the things that Patrick is bringing to the show.”

Martella also revealed that he's a huge fan of the show. The Walking Dead Season 4 premieres on Sunday, October 13, 2013 on AMC.