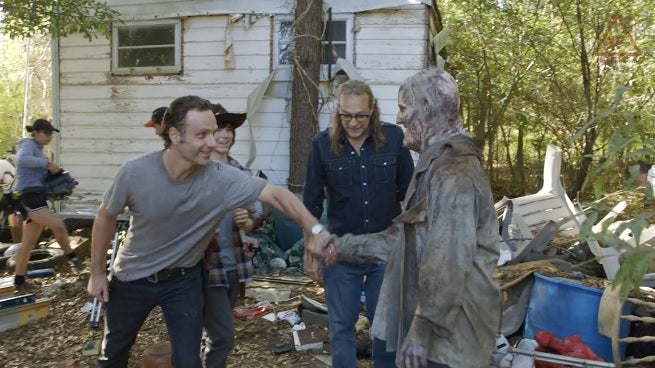 No one is safe on The Walking Dead, right? That's a frequent refrain on the part of showrunners, and everything about the show is locked down as tight as they can in service of that narrative.

Except when it's not, and we know somebody is just fine.

Earlier today, we wrote about Anthrax's Scott Ian appearing on AMC's The Walking Dead. In the piece at Nerdist, they noted how uncommon it was for anyone to get to debut footage from the set of the show before episodes have aired...and you can kind of see why.

The image above, which is a screen capture from the episode of Scott Ian's Bloodworks, depicts Lincoln in costume as Rick Grimes...clean-shaven.

Why's that a big deal? Well, ever since he showed up at a red carpet event recently without Rick's trademark beard, there's been some speculation that showrunners might shock everyone and kill Rick Grimes on TV.

It never seemed like a particularly likely scenario; in a season where they keep repeating the mantra that they want to follow the comics as closely as they can, it would be bizarrely out of character to decide to kill the guy who remains, about 75 issues past the point where they're adapting, the series' protagonist.

Still, both Lincoln and the series' producers have played it somewhat cool, with the actor telling an interviewer that his character either shaved, or isn't on the show anymore, or both and others refusing to speculate. That's the kind of non-committal behavior that fuels wild speculation on a show as popular and successful as The Walking Dead.

Thanks, then, to Scott Ian for (unintentionally, to be sure) putting one of the stranger The Walking Dead rumors of the season to rest.

Proof The Walking Dead's Rick Grimes is Safe, Whether Andrew Lincoln Shaved Or Not