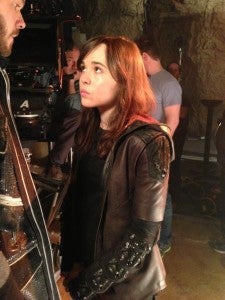 “One day somebody somewhere is going to find a way through the morass that the Queen & Country media rights have become and there will be a movie or a TV show or something but holding one’s breath at this point is I think a dangerous, dangerous prospect—you might pass out,” series creator Greg Rucka told ComicBook.com back in May of 2012.

It looks like those who passed out must have woken up by now, becuase Variety just announced that Ellen Page is in talks to star in the feature film adaptation of the popular graphic novel series from Oni Press.

The report indicates that Fox has been looking for a franchise for Page, and that they're hoping to build a Bourne-style spy tentpole out of the series--which would be nice, considering that the last time one of Rucka's graphic novels hit the big screen, it failed to generate much in the way of momentum. That was Whiteout, the Kate Beckinsale vehicle that bombed in 2009 alongside fellow comics adaptation The Surrogates.

When we last spoke with Rucka about the future of the franchise, he was skeptical--and not just because the rights had changed hands a few times and nothing had ever materialized. Every couple of years, they start working on the project again, “And then something happens that scares them away,” Rucka explained. “They’re paralyzed by the fact that it’s a female lead. That’s what it comes down to—they’re paralyzed by the fact that the lead in Queen & Country is a woman and I’ve literally had conversations with executives where they’ve said, ‘Is there any way that we can get a man up there with her?’ and it’s like, ‘Well, sure. That’s not Queen & Country. Feel free to write that yourselves.’  It’s absurd.”

With a little luck, a marketable lead like Page--especially one who will be coming off what's expected to be a huge hit in the form of X-Men: Days of Future Past, in which she plays a key role--should help to offset that mentality and the attendant urge to make changes to the source material. You can read more from our interview with Rucka at the link above, or download our podcast interview with Rucka, in which those comments were made, here.