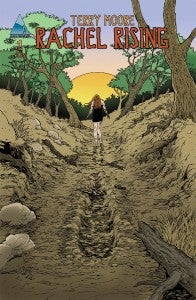 Last year at San Diego Comic Con International, Terry Moore teased fans with the prospect of an other-media adaptation of Rachel Rising that he said at the time he hoped to be able to talk about soon.

Soon, of course, became a number of months and it was only in April that the news finally broke that Watchmen and The Walking Dead producers had teamed up as part of a new group that optioned Moore's series as its first TV property.

We caught up with Moore at Comic Con this year and asked him whether it was always the same deal, or whether perhaps the property had fallen through and then caught on again in a different spot.

"No--actually it was acquired last year and it takes a while for them to ramp up and then earlier this year the company announced that they were going to move forward with it--they're going to make a pilot and work it," Moore told ComicBook.com. "So they are and I had a meeting with them today. Things look great and more power to them. It's in its early stage and they're working on a pilot."

Of course, last year he also intimated that Rachel Rising might not be long for this world. A dark and twisted series, Moore said that in an increasingly violent world he wasn't sure how long he wanted to stay on board. This year, though, he seems to have changed his tune somewhat.

"If the TV worked, I would be crazy to stop the book, right?" Moore laughed. "Which is actually going to work out fine because this whole original first 24 issues of Rachel was really just a setup. I always pictured her character as what she does beyond this setup, once everything is established. So it's kind of like a Bill Cosby thing; 'I told you that story so I can tell you this next story. So that will work.'"