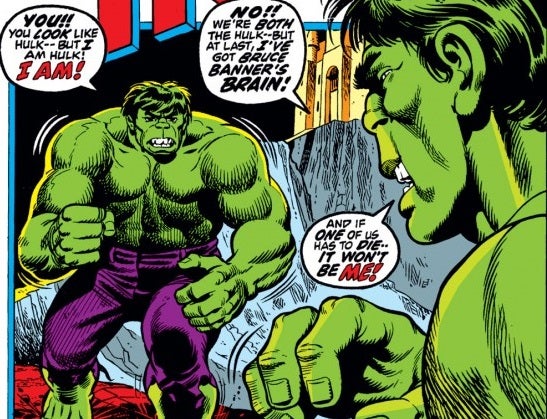 The first comic book I ever bought with my own money was The Incredible Hulk #156. It was a terrific place to start. Artist Herb Trimpe was at the top of his game, writer Archie Goodwin wrote one hell of a tale and the new arrival, inker Sal Trapani made an impressive debut-- it was as though he was out to make everybody forget they'd ever heard of the book's former embellisher, John Severin. Letterer Artie Simek was in fine form as well and everything just clicked. 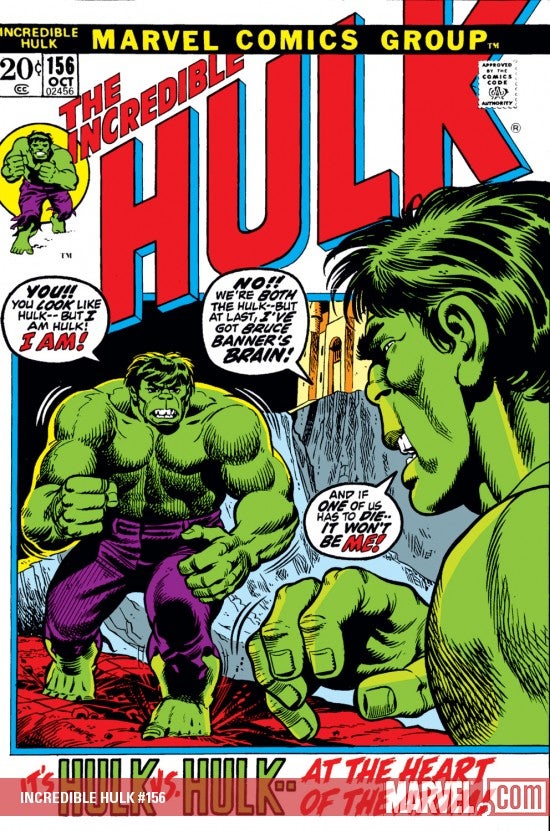 The story was the third Jarella tale. Archie took the character, which Harlan Elision had introduced previously in issue #140 and he spun a yarn like no other. It was Hulk vs. Hulk at the heart of the Atom and I had a ringside seat!

What a mag! One Hulk (the real Hulk) had Bruce Banner's brain-- the other was the unrestrained, dumb-as-a-bag-of-hammers Hulk and the result was a truly amazing piece of work.

And to me-- as a kid-- it didn't make a hell of a lot of sense. I still thought it was awesome-- but without any knowledge of who these guys were and how they were under normal conditions, I was more than a little lost. It wasn't until I'd acquired several other issues from that run that I was able to make sense of it all and realize what a truly outstanding piece of work this particular issue was.

We had a lot of comics around the house when I was growing up. My Dad collected comic books and he bought them from when he was a kid right up until he was well past that. He probably would have continued buying them had EC comics not been run out of business. Once they were sent packing, there really weren't any comics aimed at a reader his age-- so he called it quits. The only time I knew him to buy a new comic book was when DC brought back Captain Marvel in the '70s (although his comic couldn't be called Captain Marvel because those guys at Marvel Comics swiped the name-- it was called Shazam). Most of the comics which he had in his stash had long since folded up shop when I started to buy comics. EC was out of business. Blue Bolt was gone as was Donald Duck, Captain Marvel, Little Lulu, Joe Palooka, Humphrey and most of the rest. Sure, Batman and Superman were still there, but at the time-- I wasn't interested in buying my Dad's comics-- I wanted something new. I wanted characters I could call my own.

(And for those of you that suddenly get the bright idea that that's where the inspiration for the ever-Savage Dragon came from-- let me clue you in here and now that he started off as an amalgam of Batman, Captain Marvel and Speed Racer! His green skin and fin were originally a Batman-esque mask, but over the years I simplified the guy and lost a lot of the clunkier elements which I had borrowed from other characters).

I only bought the one issue.

We moved around a lot. I didn't have a regular haunt where I could pick up comics had I the desire to pick up more (although a few scattered comics entered my life regardless). I wasn't a collector-- not really-- I just had a couple comics. It wasn't until my older brother brought a stack of Incredible Hulk comics home from school and I acquired them in trade for a turn or two washing dishes that I really got bit by the funnybook buying bug.

The Incredible Hulk was my book and Herb Trimpe was my favorite artist.

Herb was the first artist I knew by name.

His work was solid, powerful and his storytelling was crystal clear.

I started buying the Incredible Hulk on a regular basis right around the time Wolverine showed up (#181, remember?) and I was in heaven! When there was a "Marvel Treasury Edition" (I loved those things) starring ol' Jade Jaws, I snapped it up and when Stan Lee's "Origins of Marvel Comics" came out-- I devoured it (that was the perfect Christmas gift-- so perfect, as it turned out, that I got two of them from different, unsuspecting sources). Stan said, in the book, that the Hulk "found his pappy in Happy Herbie Trimpe" and it didn't take much to convince me!

When Hulk #185 hit the stands, I was convinced that there would be no topping this issue! This was the event that the book had built up to for the better part of a decade (give or take-- The Incredible Hulk had a six-issue run which began in 1962, prior to my arrival on this planet, but it ended with #6 and it would be a few years before he got another shot at a solo mag). The Hulk fought General Ross! And it wasn't just another General Ross commanding the army to pummel ol' lettuce lips-- the General himself climbed into a super powered battle robot and faced the man-brute man-to-man!

By this point Herb Trimpe was inking his own work and Len Wein was writing the book. This was a match made in heaven! Len "got it" in a way no writer has before or since! He understood that writing a brainless brute was not a limitation-- that there were a million things to be done with the guy! The dumb Hulk in Len's care was misunderstood, violent, touching, unrelenting and often hilarious. I never understood later writers' desire to make the Hulk into, essentially, the same as everybody else: smart, handsome and loved by millions-- give me a Hulk that's as dumb as a post any day!

Herb Trimpe made it all work. His Hulk looked like the Hulk to me. Incredible Hulk #185 was a masterpiece (and no, I'm not going to spoil it for you-- go get your own copy). I couldn't imagine how they could top this! Somehow-- it all just clicked, seamlessly-- even with a string of rotating writers, it worked. Herb kept it grounded in reality and each writer kept the amazing soap opera elements rolling, year after year.
It never occurred to me that Herb would ever leave.

When Herb left the Incredible Hulk to go draw Iron Man, I was devastated. How could he do this? How did this happen? He was the Hulk's "pappy" --Stan Lee said so! How could he go?

Herb went on to draw Iron Man, Godzilla, G. I. Joe, Shogun Warriors, Marvel Team Up, The Defenders, Machine Man and countless others and I followed him from book to book-- sometimes it was damned cool-- sometimes, not so much. To me, it never clicked the way it had on the Hulk. Herb was being the good employee and often that meant pounding out jobs at a breakneck pace because they needed jobs turned around at a breakneck pace. When he was on a book that he loved--it was awesome--when he was on one that wasn't a good fit--it was always professional but sometimes the lack of enthusiasm showed.

Years later, with those of us who would become "the Image boys" being all the rage, Herb updated his style and looked at the work of one of the eventual members of our illustrious group and the result was a bit weird. It was an uncomfortable fit--like an older man dressing up like a teenager and going back to high school.

Neal Adams once said that an artist's style is everything they do wrong. That if they drew perfectly, their work would look like a photograph. When an artist tries to imitate another artist, it's not as though they lose their own natural shortcomings, they simply compound the problem by adding the deficiencies of another to their repertoire. After decades of sweat and dedication to Marvel comics, Herb was, unceremoniously, shown the door.

And that was the end of that.

Herb became a teacher for a few years and he wasn't thrilled with that ("Frankly, I hate it." Herb confessed). His dismissal from Marvel was a kick in the teeth. When I first met him at a convention in Seattle he wasn't a happy guy but I was thrilled to have sat next to him for the weekend. 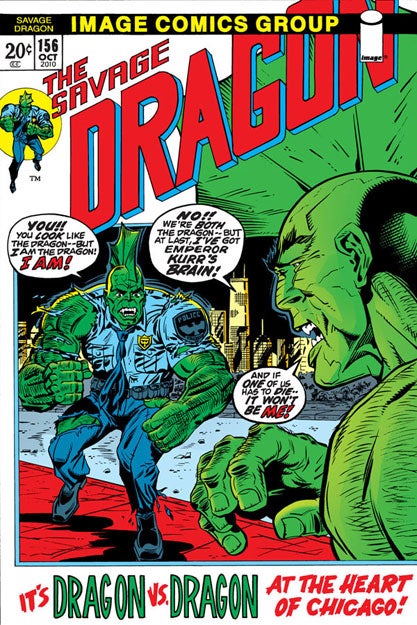 When Savage Dragon hit its #156 I contacted Herb about recreated the cover of Hulk #156 with Dragon in the place of the Hulk and Chicago in the place of Jarella's world. I sent him a rough layout and he did the rest. I had him recreate a few old Hulk covers as well and we began corresponding off and on for the years which followed.

Knowing about Herb's love for old planes I contacted Herb about contributing a story for Crack Comics #63, a Next Issue Project book, and Herb attacked Spitfire with delight. When I saw him at a convention shortly thereafter he was positively giddy!

And it was just a fantastic feeling watching him gradually work himself out of his funk and go on the convention circuit. He radiated good will and it was a blast to see him whenever we ran into each other.

When Savage Dragon #200 rolled around I contacted Herb once more. Herb loved the old Marvel method and bemoaned the full scripts modern writers were saddling artists with. We talked a bit and he agreed to working on two stories with me. One which he pencilled and I inked and one which I pencilled and he inked. I gave him a brief outline, playing to his strengths, and he did the rest. He did a great job.

The only downside was that Herb's pencils were lost in the mail. I had to print out jpegs blue line onto art boards and ink it that way. It wasn't the same--but I made the most of it and had a ball. His inks over my pencils was fascinating to look at. And how wild to compare the two as both jobs had pieces of us both and yet looked nothing like each other.

When I asked about splitting up the art I was stunned when Herb said, "If you want to keep all of it, my gift to you."

I was looking forward to seeing him at the Big Wow convention this weekend. I was stunned to hear of his passing. Yet another piece of my childhood gone. A great artist. A great guy. A great friend.

I'll miss him always and I regret not spending more time with him.