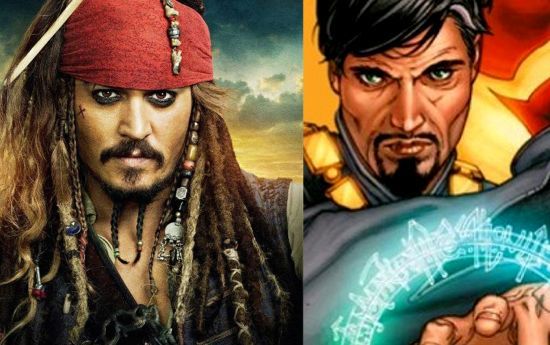 After Variety picked up last night's rumors that Johnny Depp was in talks for Doctor Strange at Marvel Studios, the trade claimed that the actor was in "early talks" for the part.

Whether that came to them from their own source or it was a misreading of the original Latino Review rumor isn't clear, but what is clear is that the revered trade publication have walked it  back somewhat--apparently following denials from Marvel.

"While it makes sense that Marvel would want to have a conversation with Depp over how it could launch a new franchise with the thesp, sources tell Variety that such talks have yet to take place and any possibility of such a pairing is premature," Variety reports now. They add, "his reps say talks aren't underway" and that the film "would have to fit in with Depp's schedule for a fifth Pirates of the Caribbean and Alice in Wonderland sequel."

Which could be managed, of course, since those are Disney films and if he were game to do them all, the studio would likely find a way to make it happen. Still, those have been in development for a while and Depp may want to get them moving and/or completed first, whereas Marvel may not be as keen to wait for what is rumored to be one of the earlier Phase Three films.

"According to Marvel, there are no meetings nor talks taking place between the co. and Depp and no talks for Doc Strange," tweeted The Hollywood Reporter's Borys Kit, adding, "we all know that just because something isn't real now doesn't mean it can't be true 6 months from now. And it doesn't mean that Depp didn't already meet with Marvel 6 months ago."

That idea--that Depp was approached a long time ago--is what Deadline is coming up with, saying that there's "no truth to" the rumor that he's set to be cast.