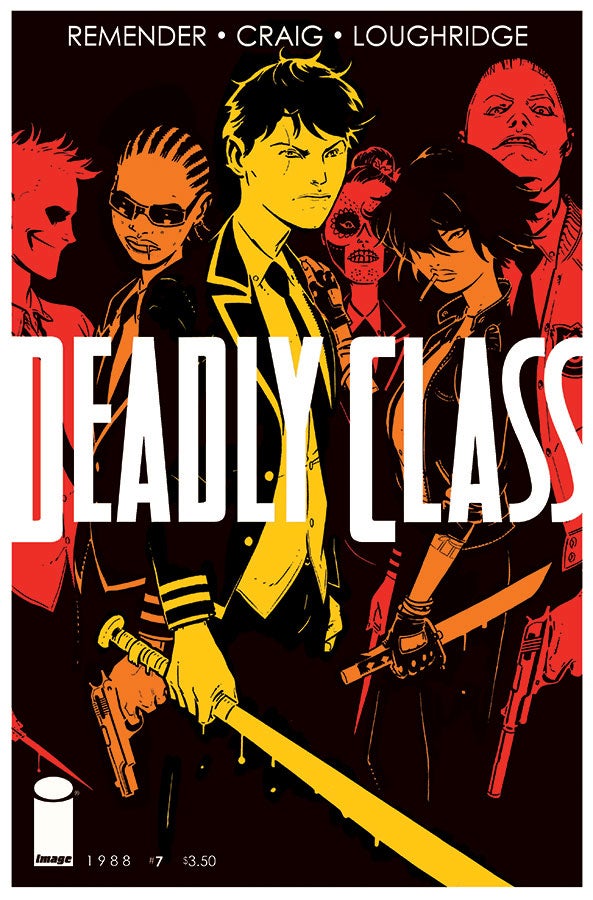 I’m increasingly sensitive to text in comics. Whenever dialogue and narration overwhelm a page or do something that an image could have done better, it sends up an instant red flag in my mind. That doesn’t mean that text is inherently bad, just that it’s often over or misused. One thing that is continually striking about Deadly Class is the balance between Rick Remender’s text-heavy scripts and Wes Craig’s tremendous visuals. It’s a balance that could easily go awry, but never does, and it’s one of the reasons why I am so excited for the return of Deadly Class.

Deadly Class #7 opens with a four-page sequence that summarizes several months of time. There’s a lot to be accomplished in a relatively small amount of space and it is loaded with both images and narration. Craig frames each set of pages with wide vertical white banners. Marcus’ narration primarily occupies this space. This sets the writing in direct juxtaposition to the related images. Readers are treated to how Marcus views these memories and how they actually occurred.

Craig crafts these panels with surgical precision in selecting characters, body language, and perspectives to tell the story. It would be possible to remove every word from this sequence and still capture the nuances of the complex recap. There is a six-panel sequence within it in which Marcus and Maria are shown acting in relation to hits of 1988 like Beetlejuice and Michael Jackson’s “Thriller”. Even without Marcus’ narration, it could capture the manic-depression Maria is feeling and how it affects Marcus. On top of that it firmly places the story in a specific frame of time. Craig masterfully composes and relates all of this information in very little space.

The way in which Marcus’ weaves in and out of the wide margins also plays into the story. Some comments stand alone, but others need to be set side-by-side with a specific image for maximum impact. In that same six-panel sequence, there is a moment where Marcus writes, “She oscillates between suicidal depression…” The narration is set on the opposite side of a wide panel from Marcus and Maria. It reflects Maria’s feelings, but also acknowledges the loneliness of depression by forcing the reader to look across the distance from Marcus’ thoughts to where Maria sits.

The sequence also serves as a nice introduction to the series. It doesn’t read like a recap of the series, but it absolutely functions as one. Readers who don’t recall everything from before or who have decided to start the series here will be able to easily access the story without having to play catch up. Marcus’ narration isn’t solely used to recap the story so far and time jump either. It is reflective of his writing in a journal that plays into the plot itself. Remender uses his narrative tools to direct the action of the story as well as the reader.

This is all indicative of why I really love Deadly Class. You can pick out a single sequence and spend an entire review digging in to how it works (or very rarely doesn’t). The panel composition, Lee Loughridge’s colors, draftsmanship, narration; all of it is consistently complex and effective. It’s a comic book I could discuss every month and always find new things to explore. Remender and Craig have invented a story that is interesting simply by the virtue of how it is being told (although the story itself is also fascinating). It’s a comic that constantly challenges and reinvents itself, an exemplar of creator-owned comics.