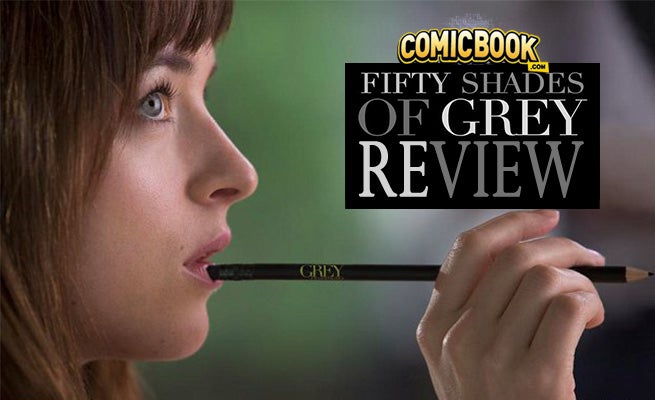 First of all, I know I'm not the target audience for this movie. Having said that, I gave Fifty Shades of Grey, like all movies I watch, a fair chance with an open mind.

The first half hour was the only portion of Fifty Shades of Grey with any sort of character. Anastasia Steele (Dakota Johnson) is a humble, shy girl finishing up college who does pretty much nothing to prompt the interest, let alone garner lust from an eccentric billionaire who always gets his way. However, Christian Grey (Jamie Dornan) takes a sudden interest in her when she steps in for her ill roommate and embarks on a 10-minute interview with the head of 'Grey Enterprises'- whatever that might actually be.

Once they get past the introduction, the film dives into exactly what you would expect based on everything you've either read or heard about from the novels. It completely loses any heart it had. For the next hour and a half, Christian and Anastasia play a manipulative game of nationwide hide and seek that includes lots and lots of sex. The entire bout feels completely meaningless because the characters hadn't been developed at all. The movie takes many liberties by assuming you know what happened in the book and leaves itself open for audience to point out plot holes.

Why does Anastasia Steele have a thing for Christian Grey in the first place? Your answer is probably as good as mine, I have no idea. It seems like no reason other than the fact that he has a ridiculous amount of money. Outside of that, he borders being an abusive stalker with a personality (or lack there of) that no one would fall for but a gold digger, which Ana didn't really strike me as.

I wonder what the trailer would have looked like if characters from the book weren't so commonly well-known. The movie relied way too heavily on prior knowledge of Christian Grey and his unique tastes in the bedroom which weren't unfathomable for a mature audience. Take any Nicholas Sparks movie, remove some plot and pull out any character development and replace those elements with as many sex scenes as you can before getting an NC-17 rating, and you have Fifty Shades.

Bottom Line: Fifty Shades of Grey will draw you in out of curiosity and possibly hopes of a good movie, then leave you wondering why you agreed to such a thing in the first place, much like the main character. 3.9/10

REVIEW: Fifty Shades of Grey Moves Slower Than You Can Imagine