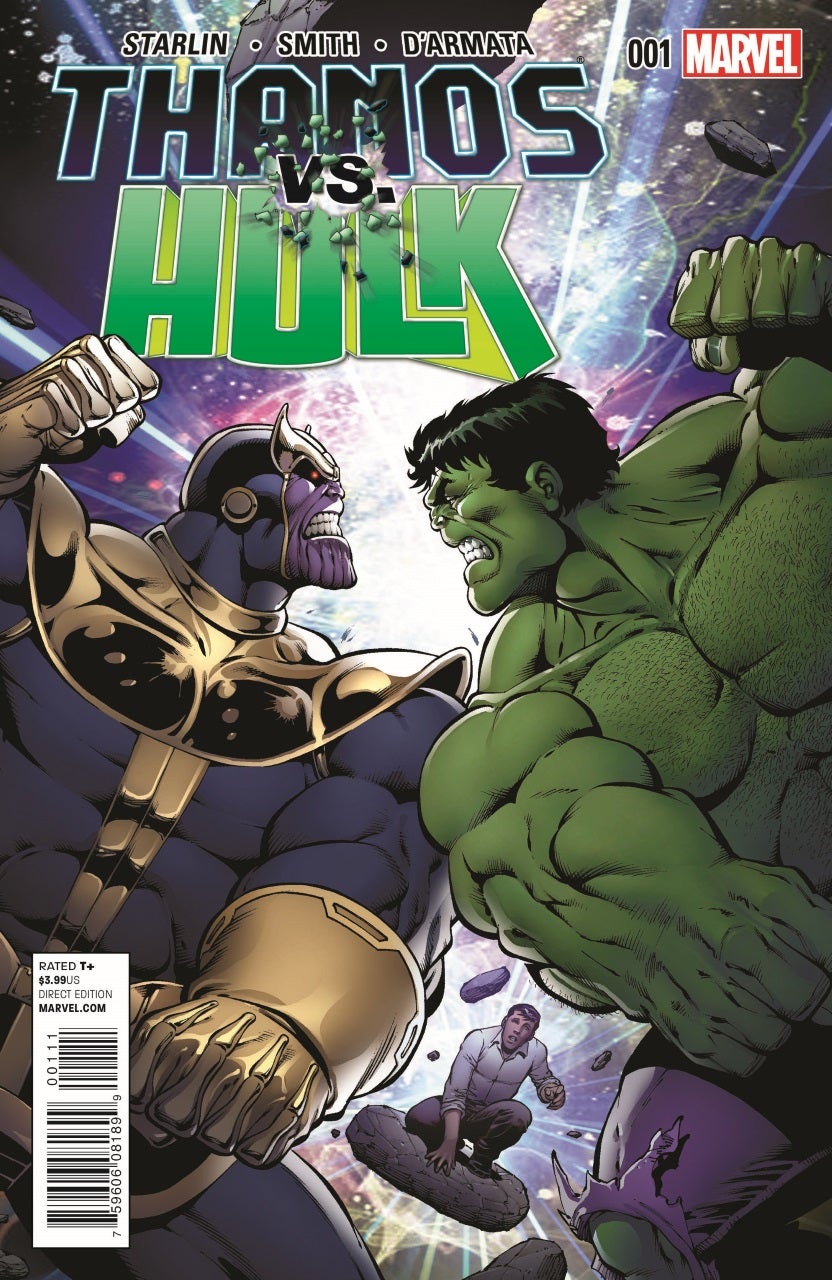 Jim Starlin is returning to his favorite creation Thanos at Marvel for the second time this year. Several months ago he wrote and pencilled an original graphic novel about the Mad Titan titled The Infinity Revelation. Although it was set within the current continuity of the Marvel universe, its characters and scope defied the status quo and placed it outside the publisher’s line up as a story that exists on its own terms. Starlin’s newest comic, the mini-series Thanos Vs Hulk is structured in a very similar manner.

In the first issue Pip the Troll kidnaps Bruce Banner at the behest of an intergalactic menace for some unknown cause. It does not take long for Pip to involve Thanos, his old teammate from the Infinity Watch, setting the stage for a showdown between these two titans. The story centers around Thanos, Hulk, and Pip, but there are ample cameos and asides provided setting the story firmly in the modern Marvel universe. The many single panel appearances from space-faring superheroes help enhance the sense of play found in Starlin’s pencils.

This is undeniably a Jim Starlin comic. His story aesthetics and stylistic sensibilities are ever-present. Thanos vs Hulk may read like a smackdown set in a place that will not affect continuity, but it’s as concerned with big ideas and epic scenarios as all of Starlin’s work. In his hands Marvel heroes are treated as larger than life gods whose actions stand beyond the morality and judgment of the reader. Even a devilish troll like Pip is elevated to the position of a classic trickster, lowly only in comparison to the incredible beings that surround him.

That sort of story may not appeal to all readers, but it is the only one Starlin is interested in telling. He is not satisfied unless his imagination is allowed to run amok, and that is when his comics are at their best. The first issue of Thanos vs Hulk sets up an engaging galactic soap opera, but there’s very little of the impact and scope of ideas that defines Starlin’s work. Most of the issue is used to move characters into position and establish locations and motives. This leaves ample potential, but is too direct and workmanlike to ever create a truly wowing moment.

Starlin’s best moments come when he is designing otherworldly set pieces. A spread of a lab shows off all sorts of alien machines and an even larger world just outside. No shortcuts are taken when crafting other planets and settings, making for an immersive experience in space. The design of Banner and Hulk’s inner mind is less complex, but just as intriguing. It’s obviously a central conceit to the story to come and one filled with meaning. Inker Andy Smith, who worked with Starlin on The Infinity Revelation as well, provides clear, clean linework that feels modern. He enhances the pencils by drawing out shape and depth while providing a refined feel to the entire comic.

Thanos vs Hulk #1 is still a great looking addition to Starlin’s collection of Thanos comics, but it doesn’t reflect Starlin at his best. He focuses so much on setting up future installments of the story that he never provides himself with opportunities to explore the world or ideas he is creating. The issues is still bound to please fans of Starlin’s work (like myself), but it is not his finest moment.