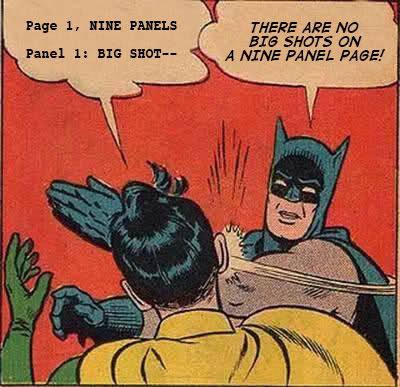 Following Savage Dragon #199, an entire issue made up of two-page spreads, and #200, a 100-page monster with a number of guest artists, Erik Larsen has another unconventional issue up his sleeve for Savage Dragon #202: he's leaving those big, widescreen images so many of his readers associate with the book behind to work exclusively in nine-panel grids for a month.

Last year, Larsen also wrote and drew an issue in "digest size" format, but because he also released a standard-sized copy of the same issue, he had to work the panels into a format that could be repurposed for either.

You can check out what he had to say about #202 on Facebook here, and the meme image he's referencing at top:

The challenge for Savage Dragon 202: every page shall have NINE panels and no two pages will have the same panel configuration. Go!

And after doing an all double-page spread issue--a story that was 10-panels long--I figured I was due to go to the other extreme.

Nine panel pages of uniform size can get monotonous. But the idea here is to not repeat panel configurations.
The inspiration for this came from this blatantly untrue meme. Of course you CAN do a 9-panel page with a big shot. You just have to make the other panels that much smaller.

The issue should hit the stands in February. For everything you need to know to get you up to speed on this month's #200, check out the Meanwhile... episode above.

Savage Dragon #202 To Be Another Experimental Layout, Says Erik Larsen

Boruto Reveals How Far Naruto Will Go to Save His Son