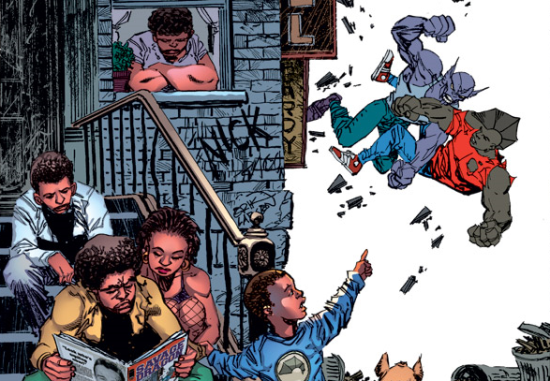 Shortly before the passing of the great comic artist Nick Cardy, Savage Dragon creator Erik Larsen decided, apropos of nothing, to make the cover of February's Savage Dragon #196 into a tribute to Cardy, whose work had greatly influenced Larsen over the years.

The first time Larsen has done an outright homage cover on Savage Dragon, the artist posted it to Facebook with temporary flat color on Halloween, just days before Cardy's passing. The grim timing has turned the homage cover into a nice tribute to the late Cardy.

"This one is an homage to the great Nick Cardy. My first legitimate homage cover on Savage Dragon," he noted on the image, which he reposted a couple of days later as part of a parade of his favorite Cardy covers after the artist passed away of congestive heart failure on November 3. 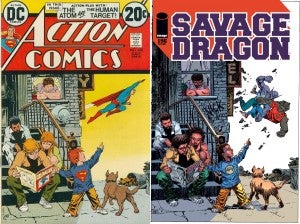 The cover was officially released by Image Comics yesterday as part of the solicitations for February, 2014, and so you can see a side-by-side comparison of the solicited cover with Cardy's original cover to Action Comics #425, seen at right. Click on the image for a larger version.

As Cardy was wont to do when working under a pseudonym, eagle-eyed fans will see the artist's name buried in the image.

You can see the solicitation text for Savage Dragon #196 below. Savage Dragon #192, which kicks off a new direction with Malcolm Dragon as the book's official lead character, hits the stands on Wednesday.

SAVAGE DRAGON: THE NEXT GENERATION! Strange things are going on in Chicago's notorious Danger Zone. The poor and downtrodden are being mysteriously transformed into hideous freaks and Malcolm Dragon is being thrown into a situation beyond what he's used to as he faces a horde of desperate killers with power to spare. Malcolm's struggle to measure up to his famous father intensifies as he plunges into a new, dangerous adventure.