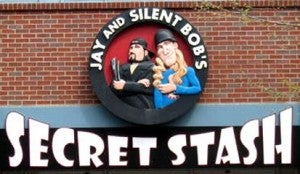 Back in June, we reported that a comic book reality series called Secret Stash was in development for AMC. The series is based on the happenings at Jay and Silent Bob’s Secret Stash comic book store, which is owned by director and actor Kevin Smith. Now, AMC has made it official and announced that they have greenlit the series for six one hour episodes.

The Secret Stash series will be executive produced by Kevin Smith, Charlie Corwin's Original Media and Elyse Seiden. According to AMC, the show will capture “the world of the neighborhood comic book store and fanboy culture.” The series will show the daily banter that takes place between both the employees and the customers of the Secret Stash. The show is scheduled to launch in first quarter of 2012.

"Draper. Meth. Zombies. This show couldn't be on a better network. AMC is to television what Miramax was to cinema back when I first got in the game: they're the premier destination for any story-teller looking to spin an offbeat yarn that no other outlet has the stones to touch," said Kevin Smith. "And as if I didn't love them enough, now they're putting my friends on TV! I'm ecstatic, proud, and extremely lucky to be in bed with a network I watch religiously anyway. And if they'd pushed just a little harder in the negotiations, I'd have done this show for no payment beyond early access to every episode of Mad Men, Breaking Bad and The Walking Dead."

"AMC has a strong commitment to quality storytelling and we're excited to help further shape this legacy," said Charlie Corwin. "Kevin and I developed this series to create a story for fanboys by fanboyism and we are determined to reveal to audiences the insular yet colorful fanboy world."

"The comic book store is, in many ways, the corner bar for comic book fans. It is still this place where everybody knows your name, and you can go and geek out with like minded people. If I lived closer, I'd want to hang out at here. It's got great energy, great personality, and is a perfect portal into the world of comic book culture," said Joel Stillerman, who is AMC's Senior Vice President of Original Programming, Production and Digital content.

Secret Stash To Air On AMC