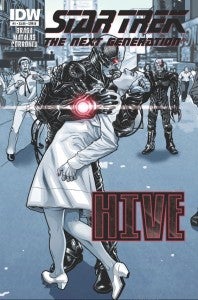 IDW Publishing today announced a new miniseries--Star Trek: The Next Generation - Hive by writers Brannon Braga and Terry Matalas with artist Joe Corroney--to follow up the currently-publishing crossover series that brings the TNG characters together with Doctor Who.

Celebrating the 25th anniversary of Star Trek: The Next Generation, the Hive miniseries will revolve around a battle with The Borg.

"It’s a thrill and privilege to be writing in the Star Trek universe again,” said Braga in a press release. “This graphic medium will provide the narrative ambition and visual scope this story deserves -- the final chapter in The Borg saga!"

The series will hit in September.

Star Trek: The Next Generation Comic Coming from IDW Publishing

Doctor Who: New Details on Christopher Eccleston's Return to the Ninth Doctor