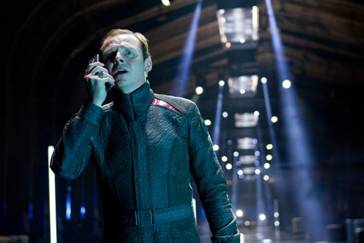 While Star Trek Into Darkness star Zachary Quinto has already chimed in to suggest that a J.J. Abrams-directed Star Trek 3 isn't entirely implausible--and that it could start shooting soon--many fans poo-pooed that idea, suggesting that it would be basically impossible for the filmmaker to be making both Star Trek 3 and Star Wars Episode VII at the same time...and that everyone knows where his priorities currently lie.

Quinto's co-star Simon Pegg, now, has come up with an alternate, and arguably much more plausible scenario, which sees the film going into production with an eye toward releasing theatrically in 2016, when the franchise turns 50.

"I would hope so," Pegg said. "It would mean we could get it out for the 50th anniversary, which would be extraordinary… obviously, it’s all in the hands of the sci-fi gods so with a bit of luck...."

Pegg hopes for a 2014 start date in order to hit 2016, but that would be difficult to work around. Pegg doesn't say as much, a 2015 start date, if Paramount wanted to, could allow for Abrams to participate, since it's widely assumed that Star Wars will hit theaters in the first half of the year, meaning that the director's obligations to that film will probably be all but over. It may be a stretch to assume that he would want to jump right back into the deep end, but if an arrangement was hammered out before Abrams began principal photography on Star Wars it could be done.

Even if Abrams wanted to participate, it may be up to Paramount to figure out a way to make the film come out when they want it, with or without him.

The interview, conducted by Collider as part of the promotional campaign for The World's End, can be seen below.