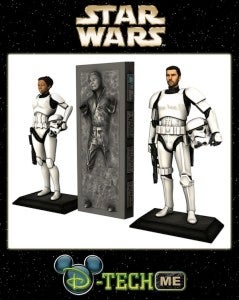 At this year's Star Wars Weekends event, Walt Disney Theme Parks are introducing a cool new option for high-end action figure collectors and Star Wars super-fans: You can be a Stormtrooper, or you can be frozen in Carbonite.

That's right, folks; it's the resurrection of that old idea that you can pay a little extra to be made into a custom G.I. Joe -- except this time, the figure will actually look like you.

Design Taxi reports, "fans would have to sit through a 10-minute 3D scan of their faces—shot using 'the world’s highest-resolution, single-shot 3D face scanner created by Imagineering scientists with Disney Research labs', according to Disney."

Once completed, the toys--which cost $99.95 each--will take about two months to be completed and shipped to your home, so you can't plan on taking them away from your Star Wars Weekend. Still a pretty cool keepsake, though...

Star Wars Action Figures Made In Your Likeness? Check.