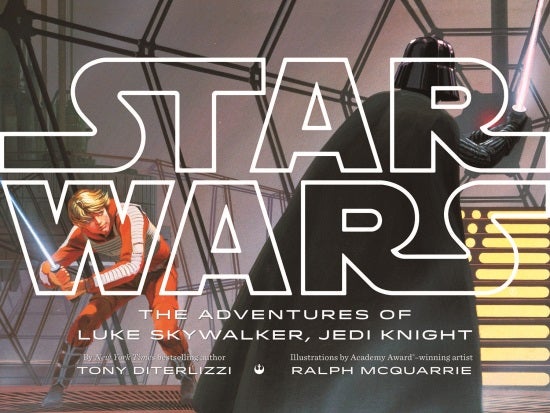 The line of books will be referred to as the Star Wars Saga program and will begin with The Adventures of Luke Skywalker, Jedi Knight, a picture book written by Tony DiTerlizzi (The Spiderwick Chronicles) and illustrated with Ralph McQuarrie’s concept art form the original Star Wars trilogy. The original trilogy’s entire story will be condensed into this book.

Individual adaptations will follow, including Star Wars: A New Hope by R.J. Palacio (Wonder), Star Wars: The Empire Strikes Back by Adam Gidwitz (A Tale Dark and Grimm) and Star Wars: Return of the Jedi by Tom Angleberger (Origami Yoda), all illustrated by award-winning Star Wars concept artist Iain McCaig. The books will be published under the Disney-Lucasfilm Press imprint of the Disney Book Group.

“We continue to explore ways to introduce new fans to Star Wars,” said Carol Roeder, Director of Lucasfilm Franchise Publishing, Disney Publishing Worldwide. “By publishing dynamic interpretations of classic Saga stories written by authors who speak directly to this generation, we will give young readers a great entry point into this universe.”

“Disney Publishing couldn’t be more thrilled to have the opportunity to publish these books globally and to work with such an array of celebrated talent,” noted Jeanne Mosure, Senior Vice President and Group Publisher of Disney Publishing Worldwide. “There’s a genuine sense of enthusiasm and affinity that these authors have for this classic material, which makes this collaboration feel fresh, instantly synergistic and effortless.”