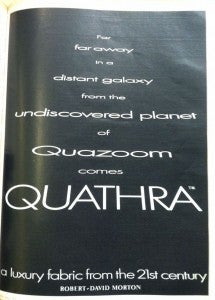 In a bizarre coincidence, the fashion blog Future Glamour recently uncovered this 1974 ad, featured in Vogue Magazine, that bears a striking resemblance to the famous "A long time ago, in a galaxy far, far away..." opening crawl in George Lucas's Star Wars films.

Sadly for the makers of the fabric, they never made it back to the 21st Century from which they were apparently sent back in time; the blog notes that the company appears to have canceled its trademark on Quathra in 1982.

The Star Wars crawl was inspired by a similar device employed by old sci-fi serials based on Flash Gordon, so in spite of some similar language, it's unlikely Lucas knew anything about Quathra in 1977; more likely, he and the textile manufacturers were just trying to evoke the same sense of nostalgic futurism.

Star Wars: Did Those Trade Embargoes Include Luxury Fabrics?

Chris Jericho On Working With Mike Tyson: You Don't Give Him A Script

DC Cancels Over 20 Comics From Their Upcoming Schedule