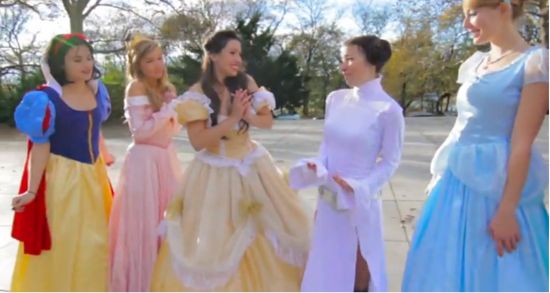 When two beloved franchises meet, it always provides ripe opportunity for parody videos. Comicbook.com has combed through the tons of Star Wars parody videos that have surfaced since Disney announced their $4.05 billion acquisition of Lucasfilms. Here are our picks for the top five Star Wars Disney parody videos.

Bonjour Star Wars - When the Star Wars characters meet Disney characters, you just know there is going to be lots of singing and dancing. Our favorite line in this video is when Princess Leia calls Mickey Mouse an ugly Ewok. Even Captain America makes an appearance in this one.

Darth Vader: What Are You Going To Do Next? -Why should other people have all the fun making Star Wars Disney mash-ups. Disney gets into the action with their own video featuring Darth Vader at Disneyworld.

Disney Wars - Disney characters with lightsabers, talking about the Force.

A Sneak Peek At Disney's Upcoming Star Wars Movies - Cracked.com shows a bunch of Disney creative types brainstorming ideas for the Star Wars sequels. The funniest thin is that some of the ideas they come up with aren't that far off some of the plot rumors that have been circulating.

- Snow White, Ariel, Belle, Cinderella and Aurora teach Princess Leia what it means to be a Disney Princess.