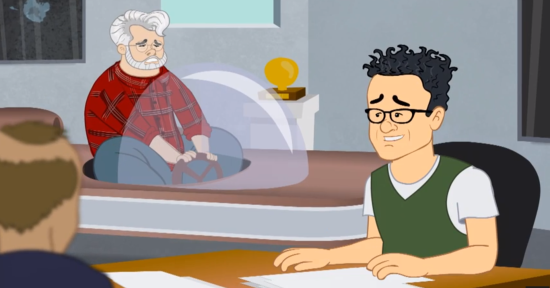 While Star Wars Episode VII has already begun filming and is getting ready to kick into full production this May, the YouTube channel KurtToons has created a video looking back at the writing process for the film in a humorous way.

One of the most interesting things about Episode VII is that the reigns of the Star Wars Saga have been handed over to J.J. Abrams. In the video, Abrams is hard at work on the script for Episode VII, along with the rest of his team at Bad Robot, when he comes to some pages about the Gungan marketplace. Turns out they were written by Star Wars creator George Lucas. Lucas isn’t too thrilled with Abrams’ script, so he took the liberty of rewriting it. Four times.

You can check out the whole parody video, embedded below.