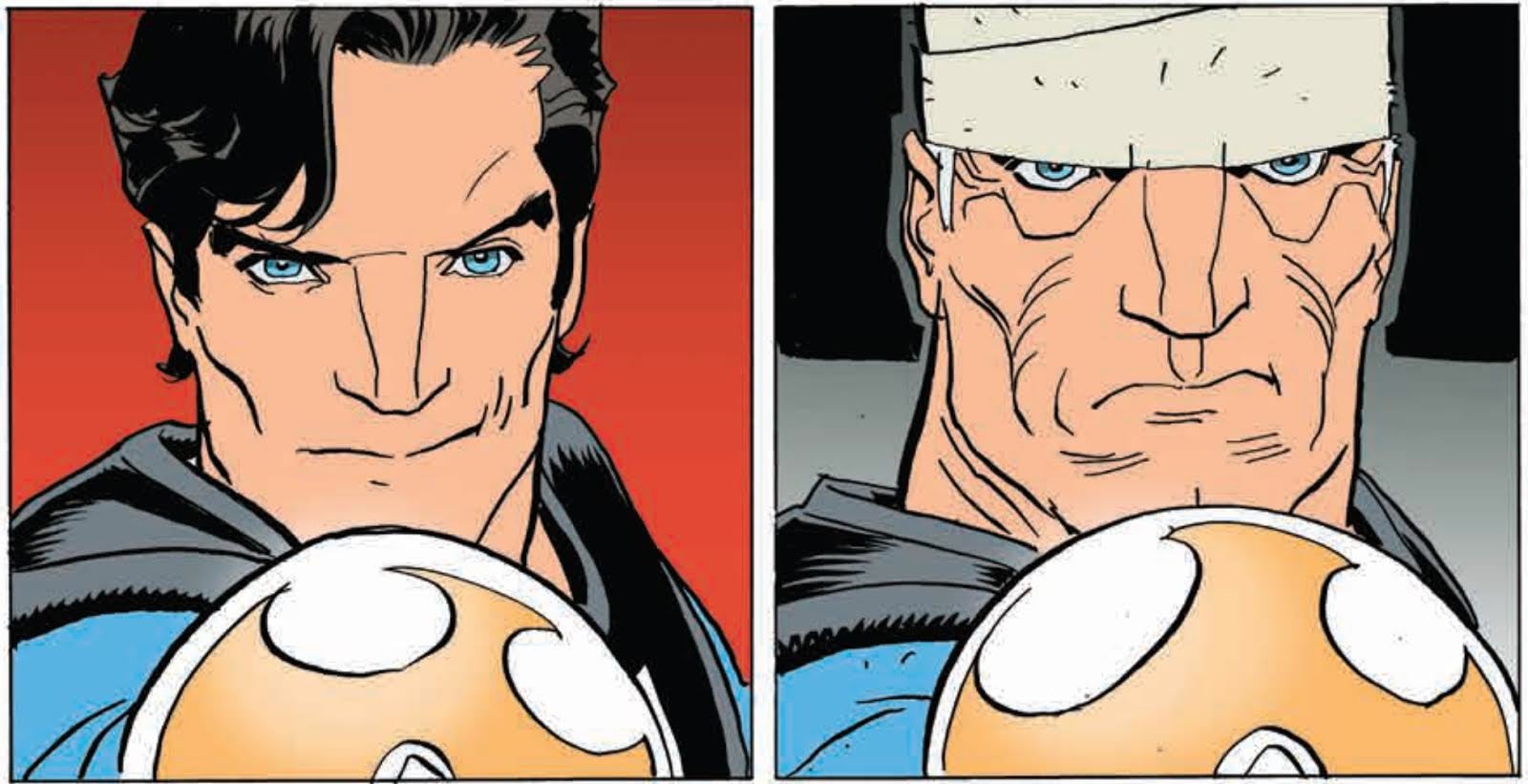 These are not words that I associate with the works of Mark Millar. Comics like Kick-Ass, Nemesis, Wanted, The Ultimates have defined Millar's style. They are comics defined by cynicism, ugliness, and a disdain for readers. Millar's scripts have brought us fine moments like an incestual baby bomb, gang rape with plenty of wisecracks, and ending a comic by giving the reader a middle finger while anally raping them. Even his more light-hearted recent works like Superior and Super Crooks have not been able to resist the temptation to play in the muck, cracking lewd jokes and including ample gore.

His Millarworld comics have built a wide audience though. They sell and sell well, and there's nothing wrong with Millar making these comics. Millar's adolescent sense of maturity appeals to audiences. While his books  are obviously entertaining for many;they're too often racist, sexist, and hateful tracts that play to the lowest common denominator. Millarworld specializes in trash entertainment, which can be enjoyable when read for what it is. It's not for me and that's fine.

Then Starlight came along and forced me to reevaluate my thoughts about Mark Millar's comics. Starlight is written by Millar, drawn by Goran Parlov, and it is everything that Millarworld comics typically are not. It is sincere instead of cynical. It is beautiful instead of ugly. It is authentic instead of disdainful. It's a comic defined by a sense of resilience, hope, and optimism. 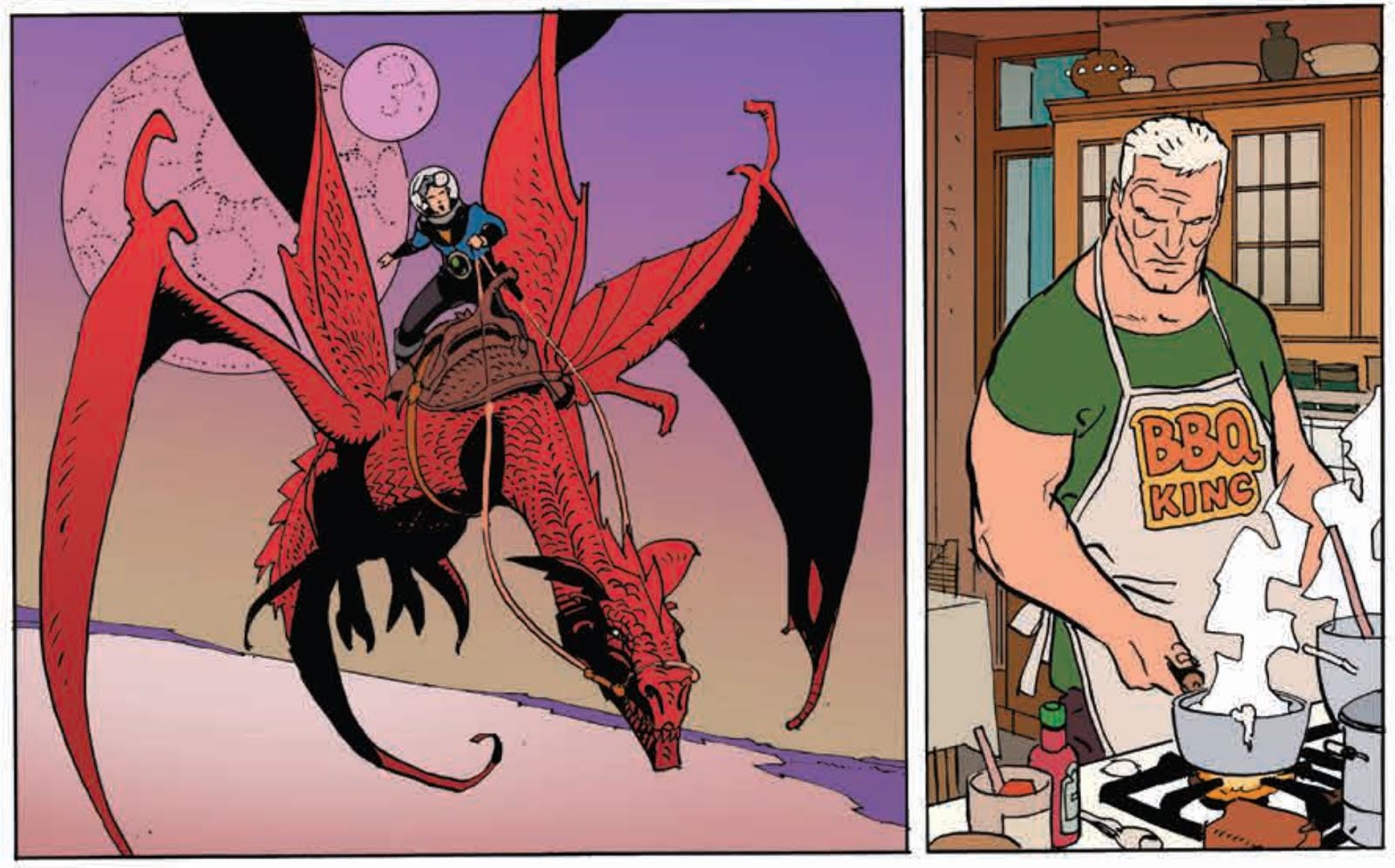 Starlight is the story of Duke McQueen. Duke is an homage to Flash Gordon. He is a man who was transported across the galaxy to fight an evil dictator and free the subjugated people of the planet Tantalus. This story starts almost forty years later though. Duke returned to Earth with no proof of his alien adventures and was berated and mocked for his stories. Instead of living the life of a hero, he lived a much more humble existence with his wife and two sons. Now his wife has died from breast cancer and his sons are too busy with their own lives to pay attention. Old and alone, he is called to return to Tantalus to save the alien world once again.

The conflict is the same as before. Duke must confront a tyrannical dictator with superior forces, weapons, and innumerable other advantages. This time, Duke is an old man. He may still be strong, but the years have their toll on his body and confidence. Flashbacks to his old battles in Starlight #1 show him as a man in his prime filled with jokes. The man remembering these moments is hunched and lacking in the same wit. It is as if a light has been turned off.

This contrast between classic Duke and modern Duke makes for a striking comparison between legends and reality. Duke is brought back to Tantalus by a child, Krish Moor, who has heard tales of Duke and believes him capable of saving the world once again. On Tantalus Duke has not aged at all. He is still remembered as a brave hero capable of conquering the most fearsome of foes. A massive statue of him rests in the center of the capital city. The years have taken a toll on the man, but not his legend. 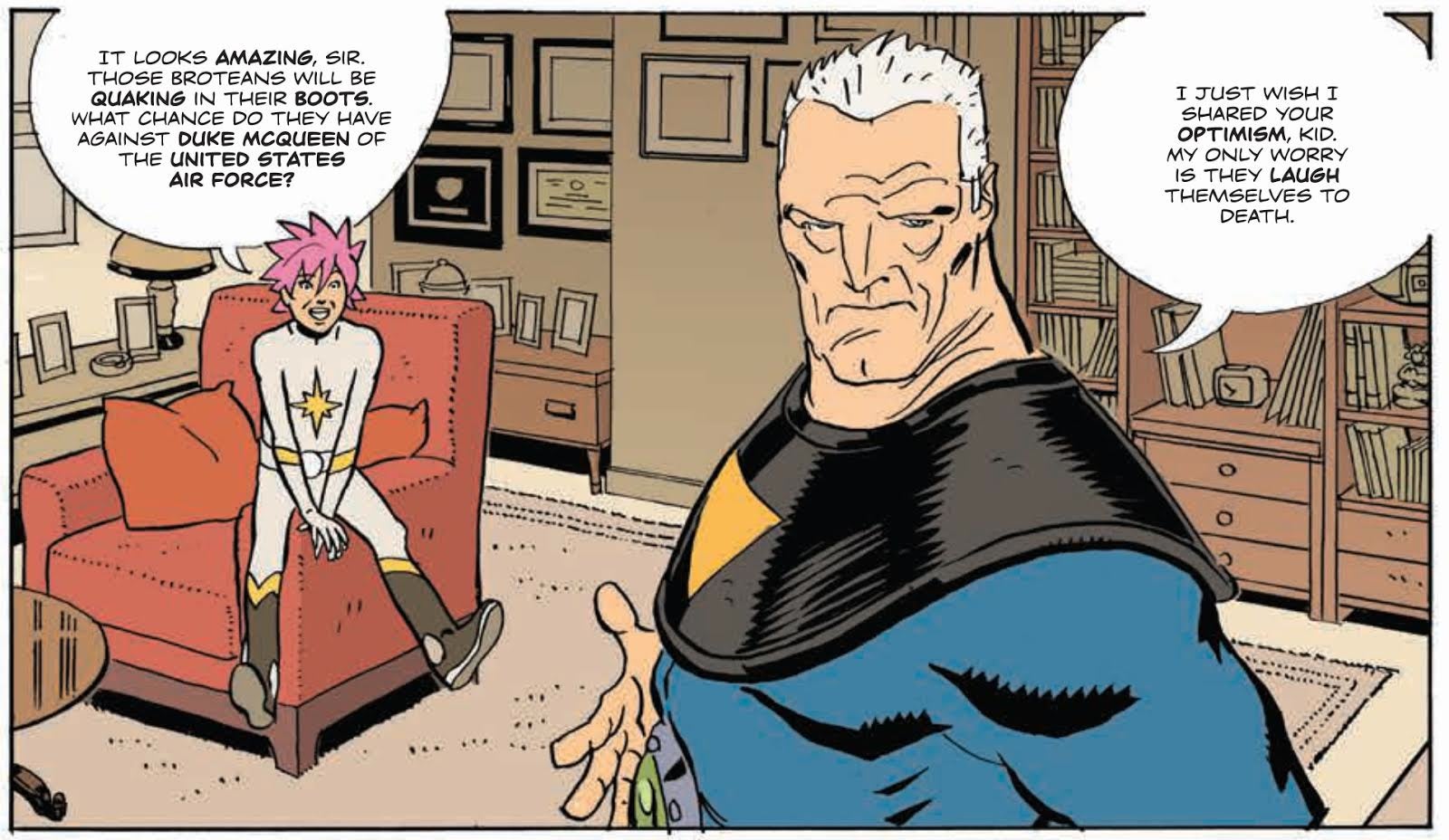 Krish is not deterred by the obvious aging of his hero though. Even after seeing the aged Duke, Krish is entirely confident the "two-fisted pilot" can save the world again. Duke's tired, world weary demeanor is placed into conflict with the boundless optimism of youth, and Krish is certainly a child. He comes off his starship assured that with Duke, saving his planet will be an easy jaunt. When Duke attempts to dissuade him, Krish responds by throwing a tantrum. He throws Duke's reluctance back in his face and pouts. Millar creates a dichotomy between Duke's pessimism and Krish's optimism, perspectives that could also be seen as realism and idealism respectively.

This duality of perspectives can be applied to the stories which provide the inspiration for Starlight. Heroes like Flash Gordon and Superman in their original stories were uncorrupted ideals of heroism. In the decades that have followed their creation though, that spirit has been corrupted. The terrible treatment of creators, propagation of characters as nothing more than corporate property, and urge to make superheroes grim and gritty have created an environment in which it is easy to be cynical. The heroic social ideals originally found in these fantastic characters have been undermined by their status as money making machines and the trend of making children's comics grittier and faux realistic.

That history doesn't appeal to the imagination of children, however. No matter what has happened to heroes since their inception, Flash Gordon is still capable of providing an inspirational ideal to a child. Duke's physical limitations and world weariness are unimportant to Krish. He has complete faith that Duke is a hero. That faith is ultimately rewarded. Duke decides to pick up his old mantle and return to fight for Tantalus again. The ensuing conflict is not fought by Duke alone. He becomes a figurehead for the resistance. In the end, he is just as valuable as a source of inspiration as a fighter.

Starlight builds to a final issue that is everything that is expected from a Flash Gordon story, and then something else. It's a battle against the evil dictator Lord Kingfisher, his terrible minions, and entire army under the worst possible circumstances with every hero but Duke captured and ready to be executed. Starlight #6 is high action in the classic pulp tradition. Of course, Duke wins the day. He defeats Lord Kingfisher in a suitably ironic way. Krish avenges his parents. The people of Tantalus overcome their oppressors and take back their planet. It's an outlandish, impossible comeback, and it is absolutely thrilling. 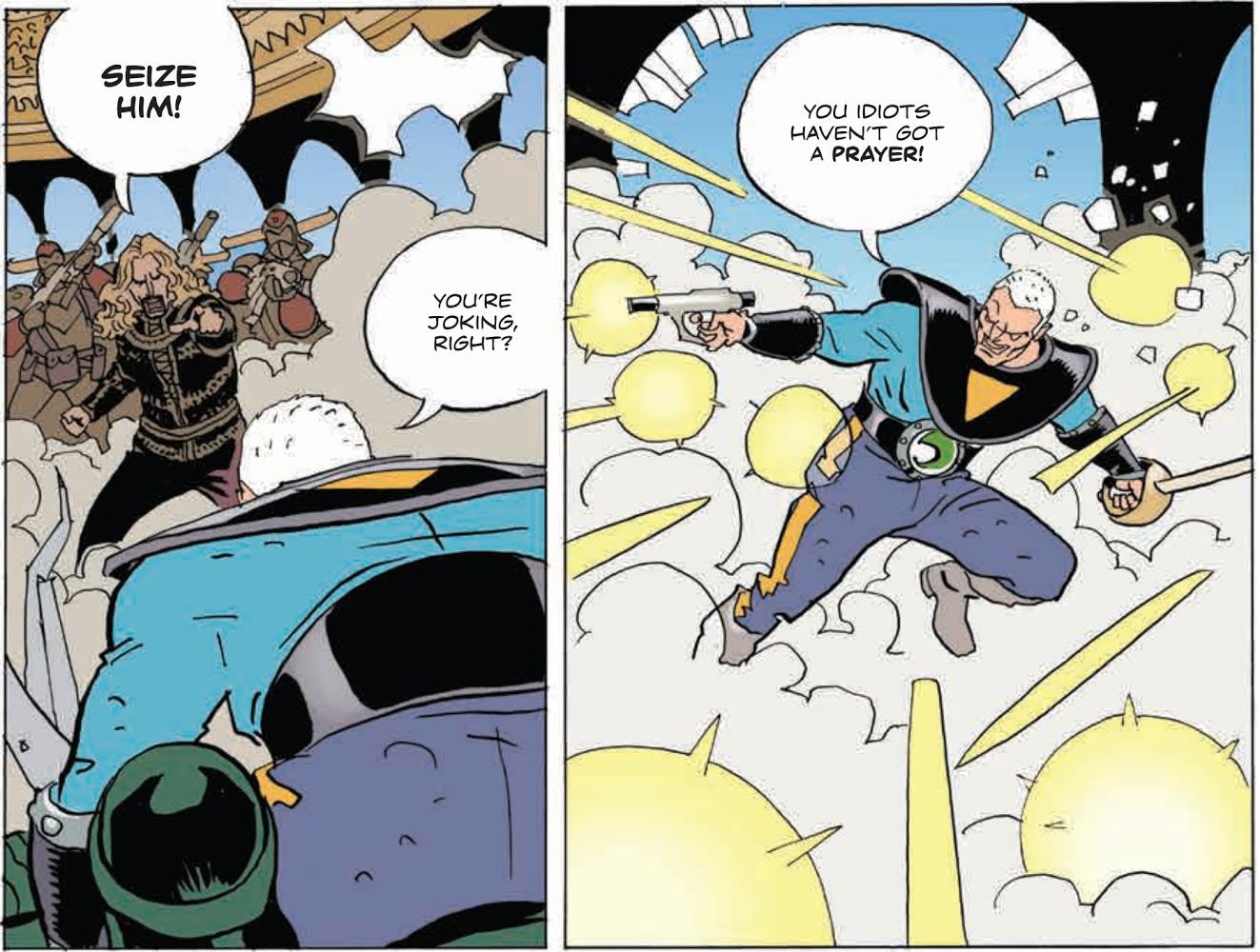 Everything about the finale is big, bright, and bold. It's good defeating evil writ large; there's nothing subtle about it. That's okay. Millar and Parlov embrace the optimism of this victory and let it play out according to genre tropes. Yet their presentation of Duke and Krish are so endearing that it never feels cliched or naive. Instead, it feels exciting and inspiring. It's an uplifting battle because it is wish fulfillment. You want Duke and his companions to win the day with wit and style, and they do. It presents itself as what it is: a fantasy.

And that's okay. Sometimes it's enough to find some bit of hope and consolation, a bit of inspiration where heroes do win the day no matter how great the obstacles they face.

The most significant victory in Starlight is not Duke's defeat of Lord Kingfisher, but his choice to return home once more. Millar and Parlov begin Starlight by separating Duke as far from Earthly concerns as possible. He is retired and disgraced. His wife is dead and his children distant. Yet he chooses to return home rather than remain on Tantalus where he is celebrated as a hero. 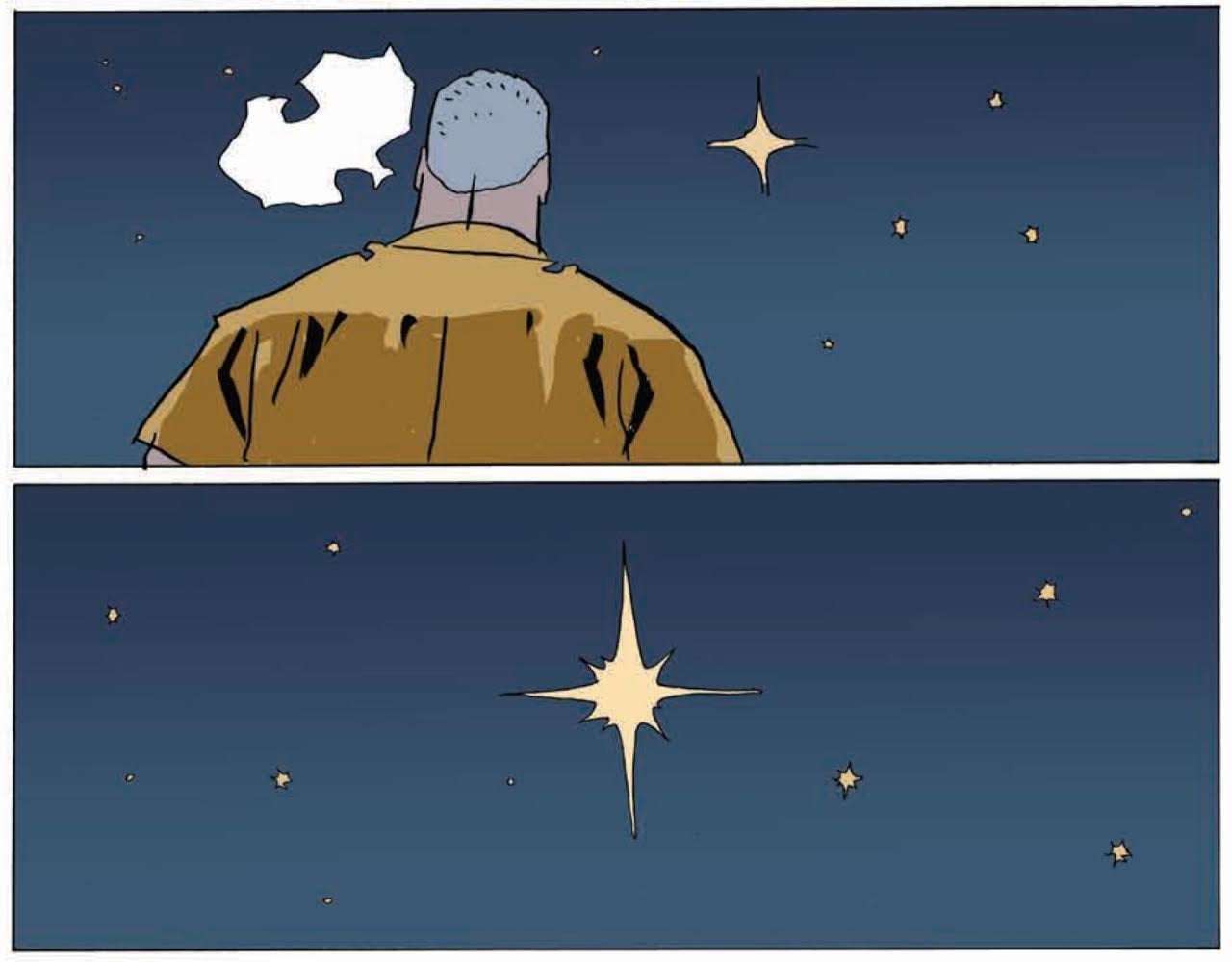 The fantasy that occurs on Tantalus is the centerpiece of Starlight, but it is framed by Duke's life on Earth. That life doesn't involve planetary dictators, starships, or epic struggles. It's defined by far more real struggles: the loss of a beloved wife, distant relations with children, and finding purpose in the world. Duke chooses that mundane and ordinary world with its mundane and ordinary struggles. He chooses the world with his children and grandchildren over the one that could give him an endless fantasy. What he accomplishes on Tantalus serves as his inspiration to return home and continue the same fights he was fighting as the book began. His actions as a grand fantasy hero give him the urge to keep fighting, to reconnect with his children and honor his wife. The romanticism of Duke's life on Tantalus provides inspiration for his real life on Earth. Krish's belief in heroes is the fuel that makes Duke's more subtle heroism possible and reveals the unending potential of characters like Duke. 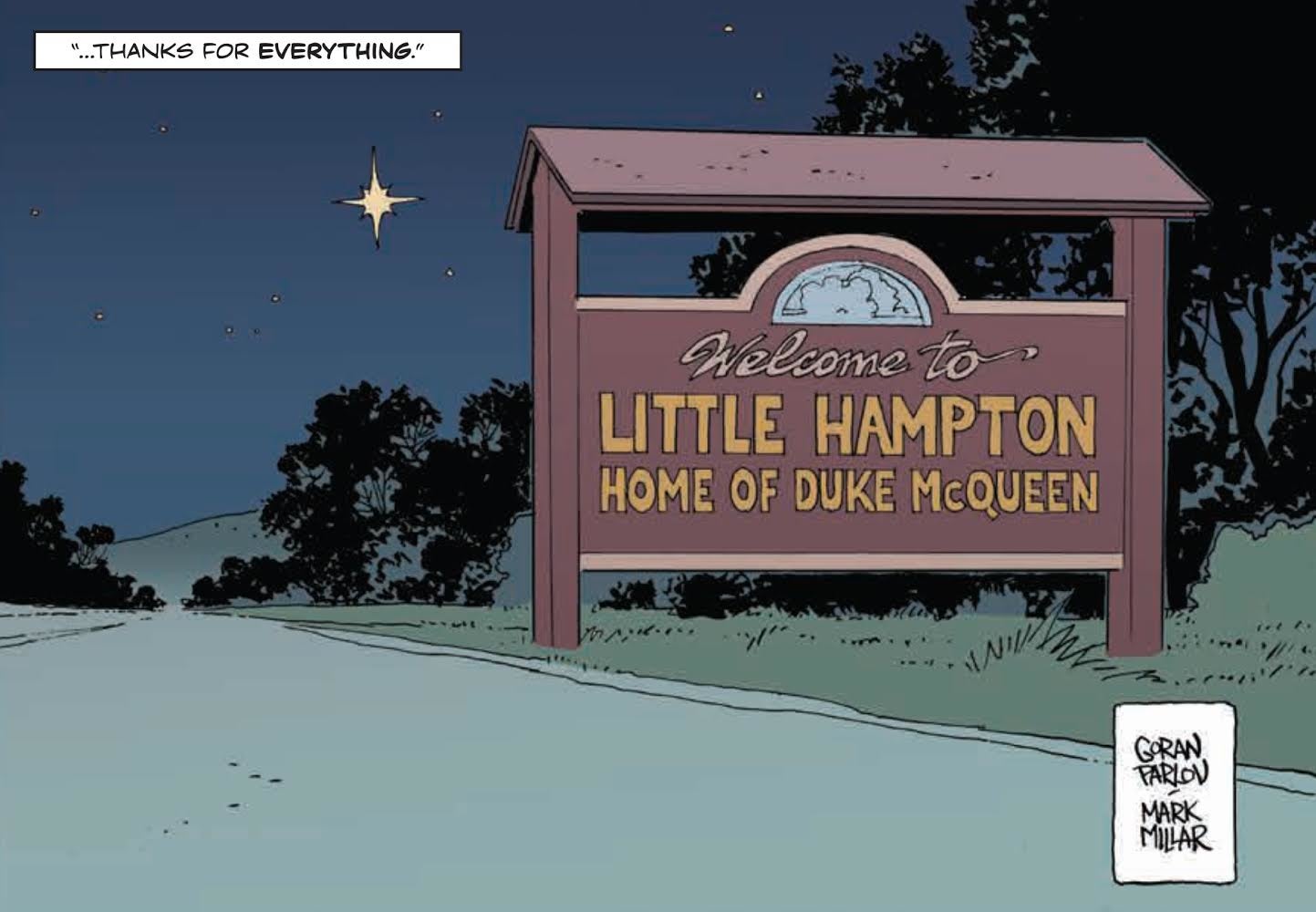 Starlight is unlike anything in the Millarworld line of comics, and almost anything Millar has scripted before. The shift in tone and theme is so drastic that it is almost impossible to reconcile with Millar's previous books, and that's a very good thing. What Millar and Parlov have crafted together is a comic that embraces its operatic, pulp source material and provided a new life to it. They have discover what makes these stories and heroes valuable and presented that value in a thrilling, new adventure. Starlight is a comic without a hint of cynicism. It believes in heroes without being naive, and presents a beautiful portrait of resilience, hope, and optimism.