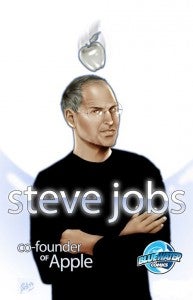 With the recent passing of Steve Jobs, there is huge interest in looking back at his inspirational life and innovative career. Publishers who had projects in the works focused on Steve Jobs are rushing books and comic books to print. The official Steve Job biography book release date has been moved up to October 24, and Bluewater Productions has announced that their unofficial Steve Jobs biography comic book is being released early and made available now.

The Steve Jobs biography comic book is written by CW Cooke with pencils by Chris Schmidt and cover art by Joe Phillips. The print edition of the Steve Jobs biography comic book will be released as scheduled on October 27, but a digital edition co-published by Paperless Publishing is available now on the NOOK and Kindle. Bluewater Productions revealed that the e-edition of the comic book will include a respectful reference to Steve Job’s passing. Bluewater Productions also announced that they will pledge a portions of the issue's proceeds to the American Cancer Society.

“Jobs' vision and business acumen revolutionized the world,” said writer CW Cooke “Between he and Microsoft founder Bill Gates, you would be hard pressed to find someone with greater influence over how we communicate, interact and do business over the last 30 years.”

“His innovations command front page news, speculation of his health affects the stock market. Not bad for a college dropout” said Bluewater president Darren G. Davis. “His story, and that of Apple, is epic. I'm surprised it took us this long to publish a proper, balanced biography of him,” added Davis.

“Steve Jobs was my hero, he changed the way we all live today. This book will not only celebrate him, but portions of the proceeds will go to The American Cancer Society in his honor. He will be missed greatly,” said Meghan Kilduff, Publisher of Paperless Publishing.