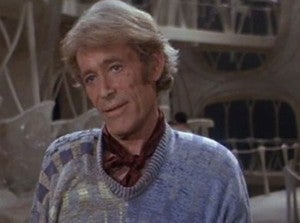 Of all the movies that Peter O’Toole starred in during his illustrious career, Supergirl is one that most will have probably forgotten. However, being that we’re Comicbook.com, we couldn’t help but remember that O’Toole did once star in a comic book movie, back before it became the cool thing for actors to do. O’Toole played Zaltar in the 1984 Supergirl movie starring Helen Slater.

According to an announcement make by O’Toole’s agent today, O’Toole passed away on Saturday. O’Toole has been ill for awhile, so his death was not completely unexpected. O’Toole was born on August 2, 1932 in Ireland. He was 81 years old at the time of his death.

The famed actor also starred in Stardust, the 2007 adaptation of the fantasy novel by comic book legend Neil Gaiman which was directed by Kick-Ass and X-Men: First Class's Matthew Vaughn; and in The Tudors alongside future Superman Henry Cavill.