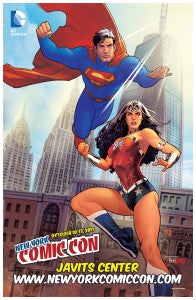 Convention organizers ReedPOP along with DC Comics earlier today revealed the exclusive poster for New York Comic Con 2013, which you can see at right. The piece of art is provided by Stephanie Roux.

With Superman and Wonder Woman protecting three of NYC’s most iconic buildings in the background – the Empire State Building, Chrysler Building, and a completed One World Trade Center – the image sets the stage for one of the most anticipated shows of the year and is--as many of New York's exclusives often are--very Manhattan-centric.

Superman/Wonder Woman will launch as an ongoing title from DC on October 9, the day before the convention begins, so don't be surprised if this, in addition to being a poster, adorns the DC booth and/or constitutes a convention-exclusive variant. In any event, it's almost a certainty that issue will be a New York Comic Con exclusive in one form or another.

New York Comic Con will take place on October 10-13 at the Javits Center.