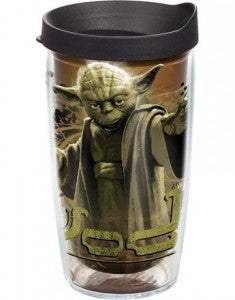 There are many ways to enjoy Star Wars and all its vast universe of characters, vehicles, strange creatures, and other aspects of its iconography.  Now, thanks to noted company Tervis drinkware, you can have a wide variety of Star Wars characters on the go in a durable, reliable way!  Tervis has announced a new line of drinkware using a vast array of images from the science-fiction classic.  The drinkware, noted for its ability to keep cold drinks cold and hot beverages hot, will feature thirteen different images in various interpretations.

The 16oz durable, plastic glasses feature everything from the animated characters of the animated series The Clone Wars, to one featuring the original movie poster for the Star Wars film.  Other glasses will feature Darth Maul, famous quotes from the film series, Yoda, Darth Vader, two different pieces featuring either the Imperial or the Rebel Alliance symbols, and many others.  You can see two of the glasses here, but be sure to check out the other pieces at Tervis website here! 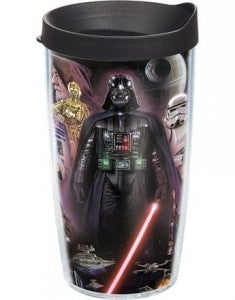