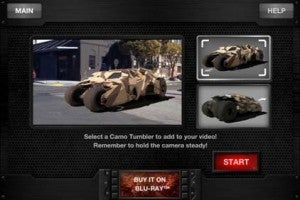 While Christopher Nolan doesn't provide running commentaries for his films on home video releases, there will be one way buyers of the upcoming Blu-ray of The Dark Knight Rises can enjoy some realtime trivia, production notes and the like--Warner Brothers will be providing a Second Screen app for iOS which, among other things, provides at least some content that syncs to the movie as you watch.

Second Screen apps are getting more and more popular as a way for fans to enjoy additional content without the studios necessarily having to incorporate all of it into the DVD and Blu-ray releases; even television shows like The Walking Dead and Conan do it, if only to provide some deleted material and production notes.

Fans who purchase The Dark Knight Rises on Blu-ray Combo Pack through the app get exclusive content that syncs to the Blu-ray.

The app is free and available now from the App story.  The app is compatible with 4th generation iPod touch devices, iPhone 4, iPad2 and the New iPad.