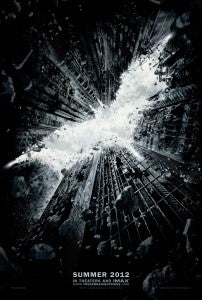 In a new book called The Dark Knight Manual, which ties into The Dark Knight Rises by Christopher Nolan, it's revealed that while The Joker may not actually appear in the new film, that doesn't mean he's dead or irrelevant.

In fact, his past may have more to do with Batman's future than anyone has yet imagined.

The Joker's casefile with the Gotham City Police Department is still apparently open, you see, but nobody knows who he is, with the book saying that they're "still no closer to ascertaining his identity."

That doesn't mean they don't have any ideas, though, and one of them is a pretty intriguing one for fans of the comics. It's speculated that The Joker may be a disgruntled employee of Haly's Circus who had a beef with the mob. Exactly why is unclear, but fans familiar with decades of Bat-backstory might have some ideas.

The exact quote, as reprinted by IGN, is:

"The Joker does not appear to have any connections to Gotham's crime syndicates, though he knocked over a mob bank. One possible motive for this, which could also explain the clown motif, is the Haley Brothers Circus. The circus was recently in town for a two-month engagement and it was rumored their boss had connections to Sal Maroni. The Joker could be a former Haley Brothers employee with some kind of grudge against the mob."

After all, mob enforcers have been, at different times in the mythology, credited with the deaths of Haly's popular acrobats The Flying Graysons, whose son Dick survived the collapse of their rig and the death of his family to become a ward of the state, adopted by billionaire Bruce Wayne and the red-clad sidekick to the Batman.

While Christopher Nolan has, over the years, told reporters and fans that he has no intention of bringing in Robin becuase the presence of the character runs counter the gritty realism of his Bat-universe. Still, introducing John Blake has led a number of people to believe that even in the absence of "Robin," per se, Blake might still turn out to be Dick Grayson--someone who might take over as Batman (as he did after Final Crisis in the comics) or even Nightwing, who he is now.

Of course, all of this could turn out to be nothing, but the fact of the matter is that much of The Joker's appeal is that he doesn't have a clear backstory--a little like Wolverine used to be, years ago before Wolverine: Origin was published. Still, just the existence of the Circus in the world of Christopher Nolan's Batman likely tells us something about the character of the place and sets the stage for Dick to exist.