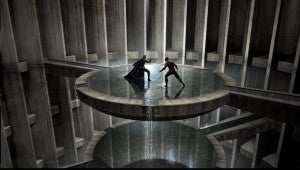 While Warner Brothers informed ComicBook.com last week that our copy of The Dark Knight Rises would be in the mail on Friday, it looks as though some folks have already received theirs, and Comic Book Movie is making good use, sharing a look at some of the Blu-ray extras with their audience.

Including, yes, this distinctively Star Wars-looking piece of concept art from the first of the film's two big Batman-Bane fights.

You can check out a gallery below.

Probably the high point of the piece, though, is the video below, which is a piece of time-lapse concept art made to give the filmmakers a sense of how Heinz Field collapsed during the film's football scenes.

The Dark Knight Rises: First Look at the Blu-Ray Extras