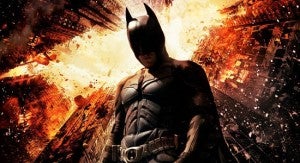 Even with record-breaking box office success, there are a lot of people who had problems with The Dark Knight Rises--continuity errors and a clunky third act make it an early favorite to oust The Avengers as the most "mistake-filled" movie of 2012 once enough people have seen it to start really complaining on the Internet, and it hasn't enjoyed the universal critical acclaim of its predecessor.

Far be it from us to tell Christopher Nolan how to direct a film, don't get us wrong, but here are a few things that would have been cool to see, in some form or another.

Everyone understands why The Joker neither appeared nor was referenced in The Dark Knight Rises, and nobody sane is going to argue with the wisdom of respecting Heath Ledger's memory in the way that Nolan did.

Still, it's clear from related merchandise and fan responses online that a good number of people, including some officially involved with the film, would have liked a little bit of closure on The Joker's arc.

In The Dark Knight Manual, an official companion book released in June, clues were dangled that suggested The Joker may have had connections to Dick Grayson's family. Since Grayson doesn't appear in the films at all, this seems particularly interesting. The book reads,

“The Joker does not appear to have any connections to Gotham’s crime syndicates, though he knocked over a mob bank. One possible motive for this, which could also explain the clown motif, is the Haley Brothers Circus. The circus was recently in town for a two-month engagement and it was rumored their boss had connections to Sal Maroni. The Joker could be a former Haley Brothers employee with some kind of grudge against the mob.”

The Haly (note the spelling difference, but still) Brothers Circus is the one where Dick Grayson and his family appeared as The Flying Graysons before they were killed.

"Now that the Dent Act had made it all but impossible for the city’s criminals to cop an insanity plea, it (Blackgate Prison) had replaced Arkham Asylum as a preferred location for imprisoning both convicted and suspected felons. The worst of the worst were sent here, except for the Joker, who, rumor had it, was locked away as Arkham’s sole remaining inmate. Or perhaps he had escaped. Nobody was really sure. Not even Selina."

How you would have done it on film? Really just that last reference. It wouldn't have pleased the people who are asking for more, but it would have been something, a token gesture to them, and it would have retained one of the things that worked best for Ledger's joker: A sense of the unknown.

This is one of those things that's really hard to do in the context of Nolan's films, but we're confident that it could have worked in one way or another. The most obvious one, we've talked about before: When Gotham's infrastructure is collapsing and they're in need of a big, Bruce Wayne-style bailout with no Bruce Wayne around to help, Lex Luthor could either have appeared in the film or at a minimum could have been name-dropped in the final moments of the film.

Why would that have improved the ending? Well, it really wouldn't have--but it would have built a bridge between this world and the next, making it easier for Warner to justify either rebooting or continuing the franchise into Justice League, whichever they decide is more likely to work.

Also, since Luthor actually did that during No Man's Land, it would have been fidelity to the source material and not just an added distraction.

Clarify John Blake's arc for those who don't get it

This is the one we feel the least passionate about, since Blake's arc seemed pretty clear to us--but since his final fate has become the source for so much online discussion and debate, it may have been worthwhile to keep that final shot going for just another ten seconds or so, to see what ended up in his hands when he arrived at his destination.

Was that the best way to say that without spoiling the ending? We want to avoid spoilers on this one. In any event, some people argue that it's unclear what John Blake will do next after The Dark Knight Rises. We wholeheartedly disagree, but another ten seconds of filming and the director could have made it unequivocally clear to anyone with a pulse, so there's an argument to be made that he might have been better off doing so.

Going into the film, many fans (and this writer) fully expected to see John Blake turn into an Azrael-type figure, who dons the cape and cowl for a while following the Knightfall-inspired parts of the plot.

While it was a reviled period in Batman's history from the standpoint of many fans, and while the full arc of it--with Azrael spiraling out of control and needing to be reined in by a resurgent Bruce Wayne--would have taken a whole other movie to tell and wouldn't have easily fit into the narrative, a modified version would have been cool to see, if for no other reason than to get the Nolan take on that odd, garish and probably movie-friendly armor that Jean-Paul Valley wore for most of his turn as Batman.

Set Alfred up for life

This is a minor thing, and I suppose that some readings of the film might allow for it anyway, but it seems really wrong to us that Alfred doesn't get to enjoy Bruce's billions at the end of the film. Can somebody get on that for us, please? It would just make us feel a lot more emotionally full.

The Dark Knight Rises: Five Things Nolan Should Have Done