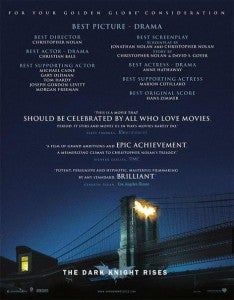 Since we already knew that The Dark Knight Rises was enjoying a pretty enthusiastic campaign by Warner Brothers in the hopes of getting it an Oscar trophy or two, it probably shouldn't be too surprising that they're also campaigning for the Golden Globes, which air on January 13.

The Academy Award nominations will be announced shortly after the Golden Globes, and so it's unlikely that a win there will secure them a nomination...but a win at the Golden Globes is often seen as improving your odds to actually win an Oscar if you're already nominated, so expect to see more of these posters, which were spotted by Stark Industries.

Don't be surprised to see a similar campaign mounted to get the film considered for Director's Guild of America Awards, as well, which are similarly considered to be helpful in securing an Oscar. 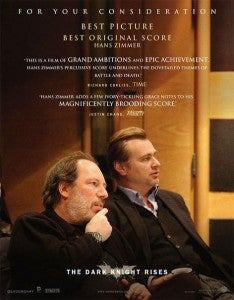 Nolan has been nominated for 3 Academy Awards (two for Best Original Screen play - Memento and Inception - and one for Best Picture, Inception) but has never won one personally (although The Dark Knight won two). He's similarly been nominated for three DGA Awards (for The Dark Knight, Inception and Memento) and  four Golden Globes (three total for Inception, and one for Memento), but has never won any of them. The exclusion of The Dark Knight from consideration for Best Picture and Best Director caused an outcry in 2008, leading to changes to the Academy's nomination process the next year.

Lord of the Rings: Return of the King won Best Director, Best Picture and a host of other awards at the 2004 Academy Awards. The film, also produced by Warner Brothers, was critically beloved and commercially successful but many saw the award, granted to the final chapter of the trilogy after the previous two had been ignored, as a kind of "achievement in filmmaking" award that covered the trilogy. The studio may be hoping for a similar turn of events in Nolan's favor.

Nominations for the Golden Globes will be announced on December 13. The Dark Knight Rises will be available on video December 4.

The Dark Knight Rises: For You Considerations Ads Running for Golden Globes