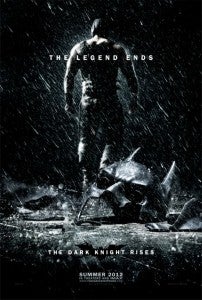 But just in case your missed them, here’s a recap of all our Dark Knight Rises articles from the week. We’ve got everything from incomprehensible Bane to hidden Robin logos to Occupy Gotham.

10 Crazy Dark Knight Rises Rumors – What are the craziest rumors circulating about the Dark Knight Rises? We examine rumors about everyone appearing from Adam West to The Riddler to Stan Lee.

Occupy Gotham: Batman Is The 1% - As more people saw the second trailer, they began to point out the same thing that we did about the connection to the occupy movement. Occupy Gotham became a hot subject on Twitter.

The Dark Knight Rises Trailer Presents John Blake And Miranda Tate – Two of the most talked about characters in the trailer might not be even in the movie. We examine speculation concerning if John Blake and Miranda Tate are really Robin and Talia Al Ghul.

Is Batman A Wuss In The Dark Knight Rises? – Backing away from Bane, being called out by Catwoman as being in the 1%, and limping around on a walking cane. We took a non-serious look at how Bruce Wayne/Batman is being portrayed in the first two Dark Knight Rises trailer.