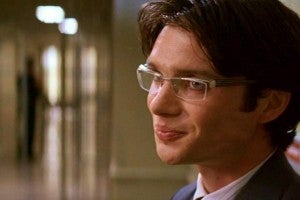 In a new interview with IFC, actor Cillian Murphy (who played Dr. Jonathan Crane/The Scarecrow in Batman Begins and The Dark Knight) told  a reporter that he feels there's a time and place for spoilers, and the lead-up to The Dark Knight Rises is not it.

“My thing is always like, it’s out very shortly. Let’s not be impatient. People are so impatient,” the actor said. “Some things [spoilers are] great for, but other things… isn’t it so great to go and see a film that you haven’t seen a script for, that you haven’t seen on set videos, that you haven’t read spoilers for, that you just go in and you just are in it? That’s what it should be. That’s what it was in the old days, and in many ways Chris is a very sort of old fashioned filmmaker in the methods that he employs and his belief in cinema, and I think that’s a good thing.”

Whether he'll appear in the third film or not has been a question for some time, but recent interviews in promotion of some of his other projects have really been pounding away at it, with The Dark Knight Rises looming so large on the horizon. The actor says that's beside the point, and that whether or not he's in the movie, he looks forward to seeing how Nolan wraps the series, which he says is a new high water mark for superhero films in general.

“I think that that franchise has just been totally reinvigorated and he’s set the bar for all sorts of superhero franchises in terms of making something that’s hugely entertaining but also really intelligent and moving. They’re phenomenal films and I think that he’s just — not just in the Batman franchise, but with all superhero franchises — that’s the level they have to live up to,” Murphy said.