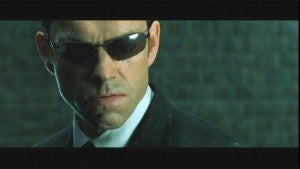 General Electric, long the parent company of NBC (though not anymore), will launch a new ad campaign tonight on the network's Saturday Night Live featuring Hugo Weaving as Agent Smith, the villain he played in The Matrix.

Titled "Agent of Good," the ad (embedded below) depicts Smith winding his way through a hospital that's abuzz with new GE products, admiring the way they're integrated to one another and make data easier to use, saving lives.

Of course, the fact that Weaving's character in The Matrix was a sophisticated computer virus hasn't eluded some of the commenters on YouTube, who are having some fun at the electronics giant's expense.