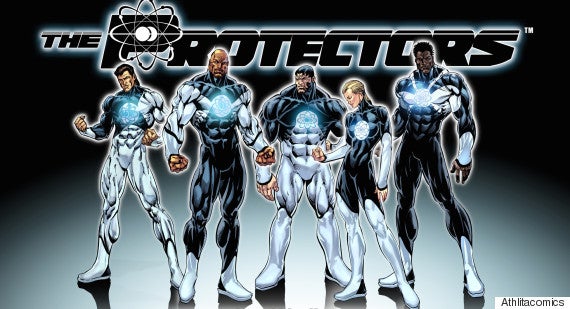 The Protectors, a sports-themed superhero comic by writer Ron Marz, artist Bart Sears and plotted by NFL player Israel Idonije, will launch as a motion comic through Madefire soon, The Huffington Post reports.

Two issues of the series have been released under Idonije's publishing label Athlitacomics, and the series is currently being developed as a Madefire motion book. Details on the motion book's debut will be announced at the Chicago Comics and Entertainment Expo in April.

"Like everybody else, I watched ProStars when I was a kid and I look at some of the other attempts to bring the world of sport and comics together and I felt that we could do a better job at it, and The Protectors was born from there," Idonije told ComicBook.com back when the series was announced. "I didn't know where it was going to go but it's been really exciting as I've seen the project develop. The images in your head come to life and the things that have happened are just so exciting."

The Protectors Coming to Madefire As A Motion Comic