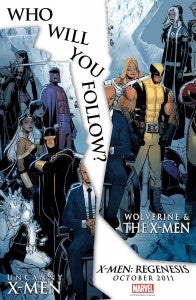 The Rabid Wolverine vs. The Boy Scout: The New X-Men