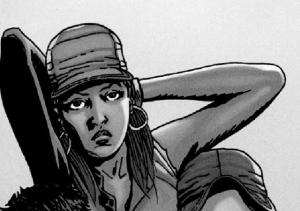 Christian Serratos, best known for playing Bella's best friend Angela in The Twilight Saga, has been cast as Rosita Espinosa in the upcoming fourth season of AMC's The Walking Dead.

Rosita Espinosa, a member of a group of survivors who joined up with Rick's people, first appeared in issue #53, not long after the big showdown with The Governor that left the group's numbers depleted and morale shattered. Along with Abraham and Eugene, she briefly convinced Rick's group to try to move toward Washington, D.C. in search of a cure to the zombie epidemic.

The character continues to appear in the comics, an impressive feat considering that most characters don't live fifty full issues in Kirkman and Adlard's The Walking Dead.

Casting breakdowns leaked earlier this year that had many fans convinced Eugene, Abraham and Rosita would be joining the cast, but producers had remained mum until today, probably concerned that their inclusion would tip some of the filmmakers' hands for the upcoming season.

Since they've already wrapped the midseason finale, it appears as though Rosita and company will be joining the series late in the season.